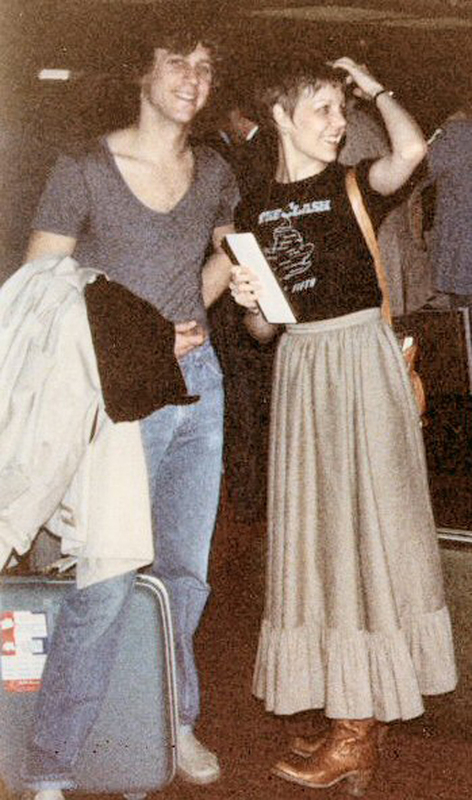 Tracy Achor Hayes is a veteran fashion journalist and editor whose career spanned regional journalism's shift to covering national and international fashion weeks, the development of the glossy lifestyle publication FD Luxe, and major shifts in technology used in fashion reporting and sales.

Hayes's experience with the Dallas fashion industry began through her grandparent's work in retail, followed by serving as a member of the Teen Board of the downtown department store Titche-Goettinger.  She then studied English and History with a minor in Women's Studies at the University of Texas at Austin, then returning to Dallas to launch a career.

The flagship downtown Neiman-Marcus served as the location for Hayes's first formal experiences in fashion (1976-1980), where she worked as a copy runner and moved up the ladder to become a national advertising coordinator working with magazines.  In those positions, she learned about national trends through presentations from the buying team, experienced the ways that departments coordinated information for ads, and watched illustrators create sketches of merchandise on live models.

Importantly, in 1980 Hayes then transitioned to working at the Dallas Morning News, which in 1978 began publishing a section titled Fashion!Dallas, one of the first regional news sections dedicated to national and international fashion coverage and offered robust fashion advertisements.  Hayes credits this unique positioning to Dallas's thriving fashion ecosystem, citing department stores, boutiques, and creative agencies that supported designers, manufacturers, and retailers.  Hayes joined Paula Singleton, an experienced journalist, and brought an understanding of fashion that was immediately put to use when she flew to Europe just a few weeks into the job to cover fashion weeks in Milan, Paris, and London.

On these international fashion trips, Hayes joined storied fashion journalists from around the US, a cadre of reporters who for the first time were breaking fashion news to American audiences days or weeks after the shows rather than the months it previously took for fashion magazines to feature European collections.  Hayes also covered New York Fashion week, working with a photographer to select photographs that she physically transported back to Dallas for the Dallas Morning News to publish.  From the 1980s to 1990s, Hayes witnessed a swell in the fashion industry - the rise of commercialization and monetization of the industry, the pride-inducing career of Texan Todd Oldham (a designer who "had something to say...was capital "F" fashion" and was well represented in Hayes's wardrobe), iconic styles and designers' breakout collections, and the professionalization of fashion journalism practices.

Responding to Fashion!Dallas success drawing readers and advertisers, in 2003 the Dallas Morning News launched the more niche quarterly glossy magazine FD Luxe, which had Hayes at the helm.  While previously, working more strictly as a journalist, Hayes had modeled a "separation of church and state," she now worked strategically with advertisers and opened content to include not just clothing and makeup but luxury lifestyle materials.  Even with that eye towards commercialism, Hayes prides herself on "early showing of the realness and validity of everything going on in the LGBTQ community" that was featured in FD Luxe.  The publication featured information about DIFFA (Design Industries Foundation Fighting AIDS) denim jackets auctioned as a fundraiser, featured models who were HIV positive or were impacted by HIV/AIDS, and, though ultimately unsuccessful, attempted to feature the "Fab Five" from the television show "Queer Eye for the Straight Guy" on its cover.

After becoming "fried" by keeping the Dallas Morning News fashion coverage going while leading FD Luxe, Hayes made a career shift in the late 2000s, serving as a fashion editor for Neiman-Marcus's publication The Book and in a similar editorial role at the fashion boutique Forty Five Ten.

Personally and professionally, Hayes crafted a varied relationships with fashion and self-fashioning.  She remembers on her limited budget as a journalist, she leaned into her Texanness on her first trip to cover European fashion weeks in February 1980, wearing a punk t-shirt with a Ralph Lauren prairie skirt and cowboy boots.  She often dressed boldly, stating, "I never met a trend I wasn't ready to embrace...Norma Kamali, how big can my shoulder pads be?...Never a second of boredom...I live for change, that's what fashion is!"  She particularly loved the New Romantics in London, often received some swag from runway shows, and later when working at Neiman Marcus purchased more designer clothing with employee discounts and sample sales.   Since retiring, she now mostly engages with fashion intellectually and through shopping with independent brands and smaller boutiques.