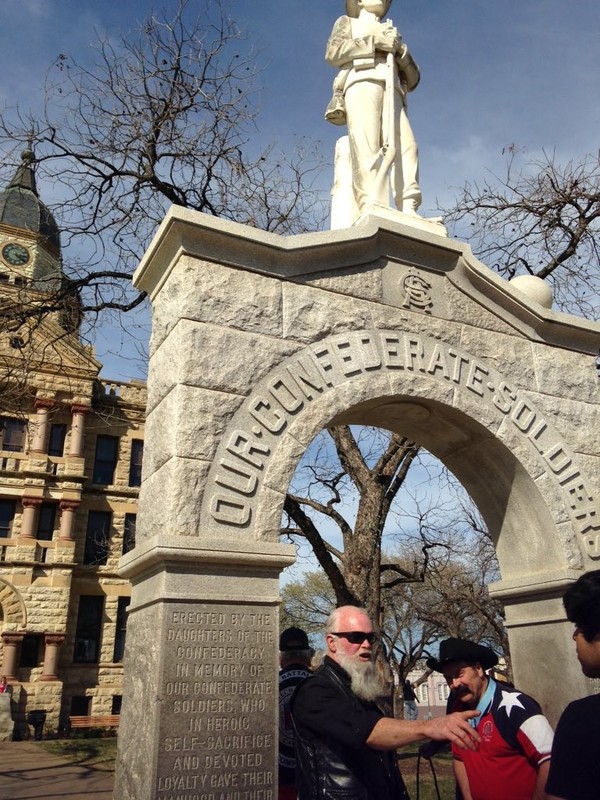 The United Daughters of the Confederacy donated a memorial to CSA soldiers on the lawn of the Denton County courthouse in 1918. It was designed with separate water fountains for whites and African Americans in its base, and many still consider it a symbol of Denton's segregated past. (Photo courtesy The North Texan)

Founded four years before the Civil War, Denton straddled the edge of the Texas frontier, which comprised of mostly subsistence farmers. By 1870, 329 white residents and thirty-two black residents lived in Denton. Many of the black residents were emancipated slaves that migrated from White Rock settlement in Dallas County after the Civil War, and formed Freedman Town, which was located about two miles south of downtown Denton. In the ensuing decades this community would evolve into a prominent center, called Quakertown, within the city of Denton. The boundaries of the community were Withers Street to the north, McKinney Street to the south, Vine Street to the east, and Oakland Avenue to the west. By 1920, Quakertown consisted of self-sufficient businesses, including a lodge hall, a drug store, a café, barber shops, a public school, several churches, and other businesses.[5] Most Quakertown residents that were not employed within the community worked as servants for white residents or as farmers or laborers. Other residents worked in businesses along the Denton Square or at the two universities; North Texas State Normal College, the University of North Texas today, and the College of Industrial Arts (CIA), now Texas Women’s University.

After CIA’s establishment in 1901, the City Council began a long campaign that would eventually led to the demise of Quakertown, which was adjacent to the white female institution.[1] Throughout the 1910s, the editor of Denton Record-Chronicle published several articles of the city’s plans to transform Quakertown into a park and/or a site for fairgrounds. Additionally, City and State officials were concerned about a black community being in close proximity to the white female institution. Alma Clark, wife of a former Quakertown resident mentions in order for students to travel from their residence was “to go through downtown Denton, through Quakertown.” By 1920, it was clear that the City and other organizations closely involved with CIA intended to remove the residents of Quakertown from their homes. For instance, Dr. F.M. Bralley, the president of CIA, issued a statement, describing Quakertown as a business barrier; “It [Denton] could rid the college of the menace of the negro quarters in close proximity to the college and thereby remove the danger that is always present so long as the situation remains as it is and that could be done in a business way and without friction.”[2] Despite this issued statement, Ruby Cole, a decendent of Quakertown residents, mentions that black residents of Quakertown worked as cooks for CIA. The following year, the city issued a ballot, which gave residents the option to vote for bonds that would be used to purchase the Quakertown lands, and create a park system. The vote was cast in favor of a park system on April, 5 1921. Subsequently, the city began to purchase lots from Quakertown residents, or gave them the option of moving their homes southeast of downtown Denton. However, the exact location for an alternate place for residents of Quakertown was not clear until July 1922, when a white landowner agreed to sell plots of land to Quakertown residents. Norvell Reed, a former resident of Quakertown and a member of the DWIF, described the transition of the migration to southeast Denton, “when the first house that was built out here, well, a group burned it because they didn’t want this sold to blacks. Furthermore, Clark recollects that residents of Quakertown “felt a threat to the community” by Klansmen and white employers, once Quakertown’s future was decided by the City. For the next four decades Denton residents would live and operate within the confines of Jim Crow segregation.[3]

As the Civil Rights Movement of 1950s and 60s became a reality, some Denton residents challenged segregation, including the DWIF. After the Brown Supreme Court decision was made in 1954, parents were concerned about their children’s participation in integration process. Several cities throughout the Deep South, such as Little Rock, Birmingham, and New Orleans made national headlines, due to serious backlash to school integration. For instance, Fellowship member, Evelyn Black describes her observations among Atlanta residents after the Brown decision, “I do remember hearing a lot of talk among the faculty and parents that this [integration] was not going to work; we better get prepared for some race riot, it was really scary.”

Denton itself did not experience radical resistance to integration, and North Texas State led the way to integration among universities in the South. First, in 1956, Joe Louis Atkins won a suit that allowed African American students to enroll at North Texas. Abner Haynes and Leon King were the first African Americans to play college football in Texas. Although institutions in Denton were at the forefront of integration, their actions did not go without criticism. For instance, Ann Barnett, DWIF member, recalls that “some schools wouldn’t play [North Texas State]” and team players were sometimes called, “niggers or coons.” Segregation was still practiced in the city of Denton before mandated integration in the 1960s. Dorothy Adkins, a DWIF founder, describes segregation in the Denton Square, “when they [blacks] came to the square… they were not allowed to go into the restaurants…if they dared entered the stores, they had to wait till everyone else was served.” Billie Mohair, a native Dentonite recalls; "You had your separate water fountains where one said "colored" (which usually didn't work), and you had one that said "white." You had your restrooms that said "white" and "colored" or course." Despite segregation practices in Denton, the city avoided confrontational encounters to integration, as Pat Gulley recollects, “Denton was more open than other communities, there wasn’t tremendous anger.”

Ann Barnett says the collaboration of Denton organizations eased the desegregation process: “the whole atmosphere in Denton, from the city council, to the school board, to the university was positive.” Euline Brock, a founding member of the DWIF, recalls that children were the main topic for the first meeting of the DWIF, and mentions “I didn’t want my children to grow up in that custom [of segregation] and then have to overcome it.” Pat Cheek recalls interacting with children of the DWIF, specifically Mae Nell Shephard’s son. Despite the absence of riots and protests in Denton, black children struggled to feel welcomed in integrated schools. For instance, Betty Kimble recollects, “the children said they had a hard time, because teachers didn’t want them out there.”

Desegregation in Denton also occurred outside of the schools during the DWIF’s tenure. Bettie Kimble recalls her experiences entering Denton businesses around the time of enforced integration: “What we did, we went two or three of us together, go to the restrooms, the hotels and different places, and that’s how we broke the thing [segregation] down.” Linnie McAdams, a member of the DWIF, became the first African American in Denton to be hired as a secretary, and eventually became a member of the city council in the 1970s and 1980s. Many members of the DWIF continued to serve the Denton community in subsequent decades, and have continued their legacy of promoting equality and inclusiveness.

Alma Clark, discusses the establishment of the black community in Denton, during the late nineteenth century, the formation of Quakertown and it's demise during the 1920s.

Evelyn Black discusses reactions to Brown v. Board of Education (1954) among Atlanta residents.

Dorothy Adkins recollects on segregation in downtown Denton businesses, before the formation of the DWIF in the 1960s.

Alma Clark, discusses her recollections of white members of the DWIF, seeing the conditions of southeast Denton for the first time, during in the 1960s.

Ann Barnett describes how the work of the DWIF broke down job barriers in Denton.

Euline Brock, a founding member, discusses the first meeting of the DWIF, and topics discussed during that meeting.

Pat Gulley discusses her teaching experience in Oklahoma City, and desegregating Denton during the 1960s.

Euline Brock discusses how breaking down segregation was important for her children.

Betty Kimble discusses how the DWIF broke down segregation in Denton.

Pat Cheek discusses her substitute teaching experience in Denton, after integration.
Prev Next