The story of American slavery is fraught with lore. Too often the true history has been lost, burned in courthouse fires, or sewn into the walls of demolished homes - seemingly lost in time. Yet on occasion, a window into the experiences of those that lived and persevered through the institution of slavery is provided. The story of Harriet Davis, born into slavery in Missouri in 1854, is one such moment where enough puzzle pieces exist to construct the possible life of an enslaved woman who left the plantation of her owners in 1881 a free woman.

The paper trail of Harriet Davis Shears began three decades before her birth when Gerrard W. Davis moved his young family from Fleming County, Kentucky, along the Boones Lick Trail and settled outside of Fulton, Missouri in the land that would eventually be called Little Dixie. 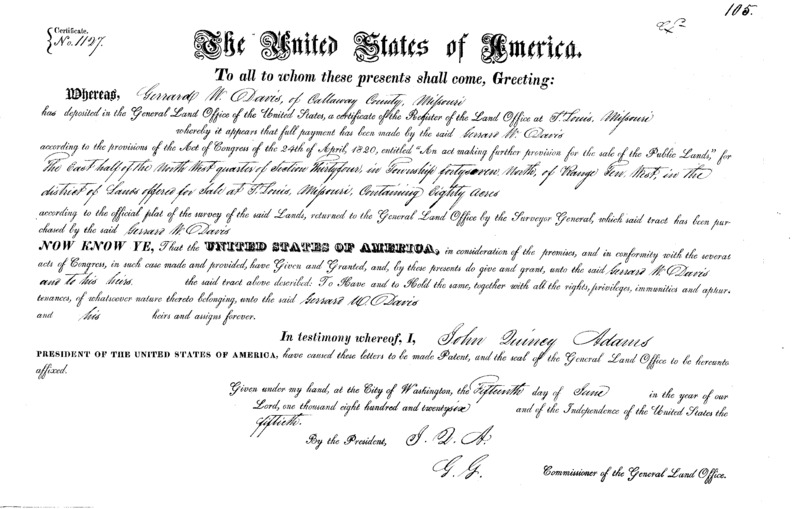 Land Map of Round Prairie Township in Missouri

On June 15, 1826, Gerrard Davis received a land patent for eighty acres of Callaway County, Missouri, in Round Prairie Township. Five years later, Davis was granted an additional eighty adjacent acres in the northwest corner of section thirty-four (as shown in the Land Map of Round Prairie Township above). This would evolve over the following two decades from untamed land into a farm which relied upon the labor of five enslaved persons, one of which was the likely mother of Harriet Davis Shears. 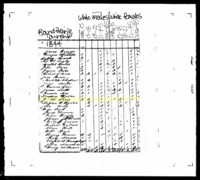 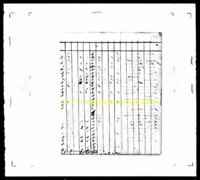 Gerrard W. Davis died on December 29, 1848. As women were not legally permitted to directly inherit the full estate of their husbands, Gerrard Davis's estate went into probate on January 26, 1849. His son, Francis Renoe Davis, was appointed as the administrator of the estate and each of the female and minor heirs of the estate were appointed white male guardians who were permitted to represent their interests in the court at Fulton, Missouri.

On February 24, 1849, the court ordered two of the slaves of the estate, Henry and Amanda, to be utilized by the widow of the deceased for the support of his children. This is the first mention of the enslaved persons in the probate of Gerrard W. Davis but is certainly not the last. 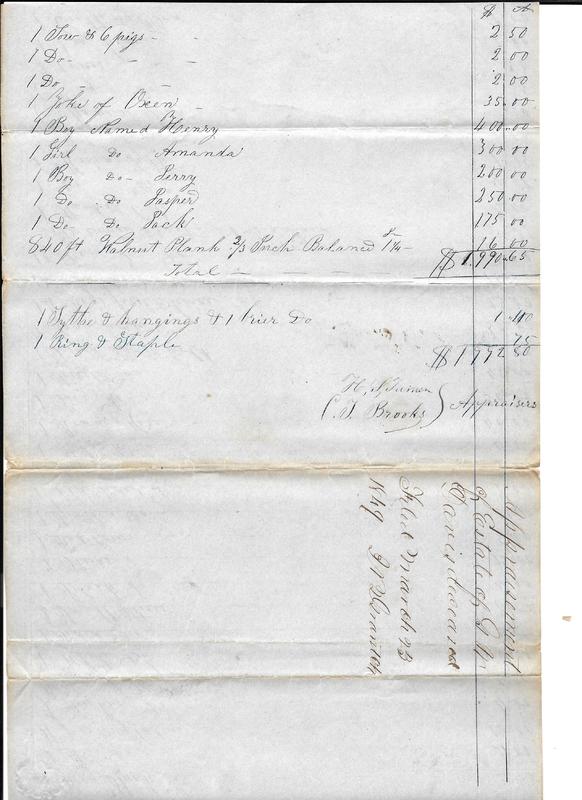 Appraisal of the Estate of Gerrard Davis (March 1849)

The items and their values are as follows (listed in the order in which they appear on the original document above):

At the end of the first year of probate, Amelia Davis is granted the use of all five slaves for 1850 to support the children of the estate. The five enslaved persons are as follows: 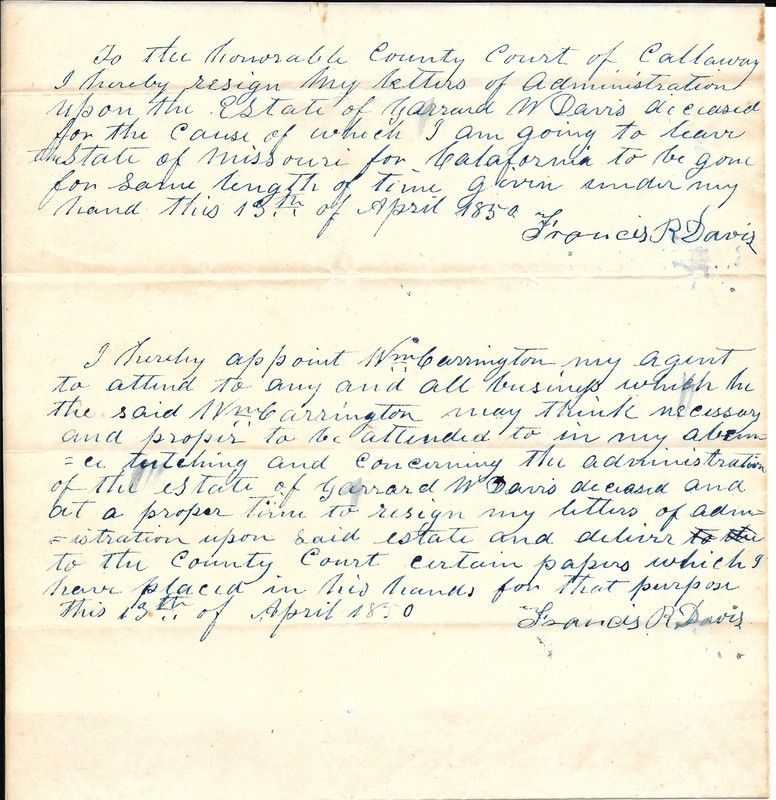 On April 13, 1850, Francis Davis announced to the court that he would leave Callaway County for California and "be gone some length of time". As a result, he resigned his position as administrator of the estate and his brother-in-law, William Carrington was appointed as his replacement. The court approved of the appointment of Carrington six weeks later on May 24, 1850 as referened in the images above. 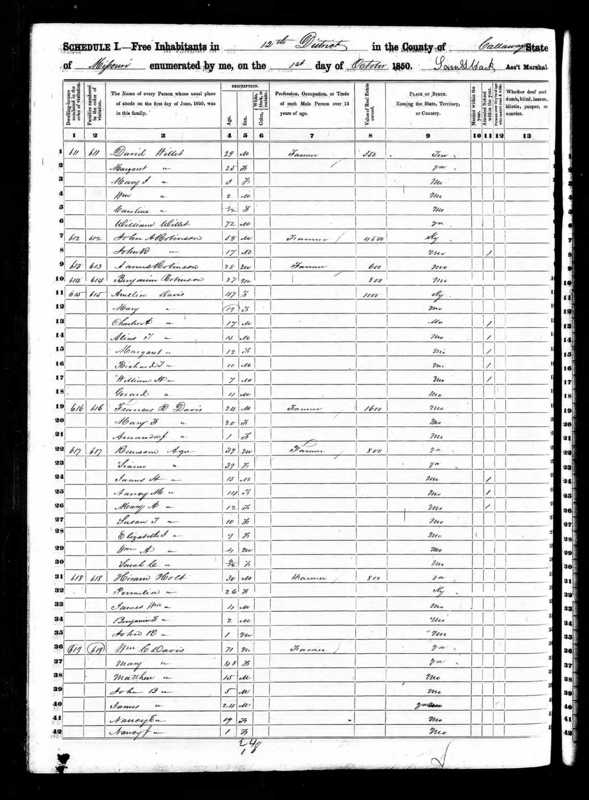 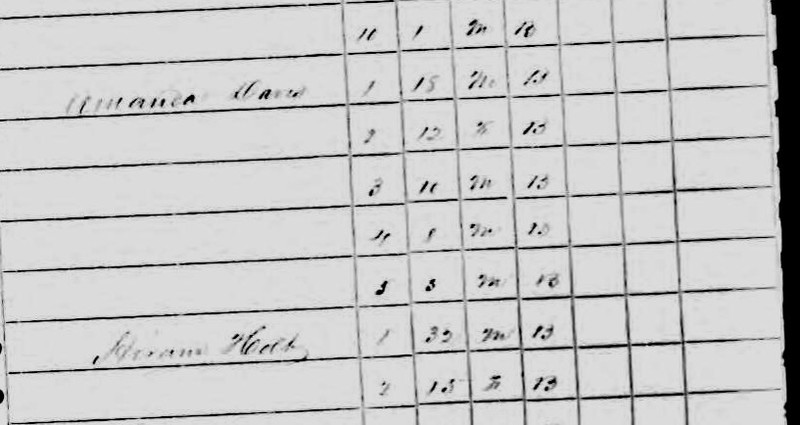 In the census of 1850, Francis Davis appears although his place in Round Prairie Township is likely theoretical as he announced his intention to go to California several months beforehand. His family is next door to his mother, likely situated on the same land. On a more significant note, as the enslaved persons of the Gerrard Davis Estate are in ownership limbo they appear under twelve-year-old Amanda Davis's name rather than the name of a white owner. 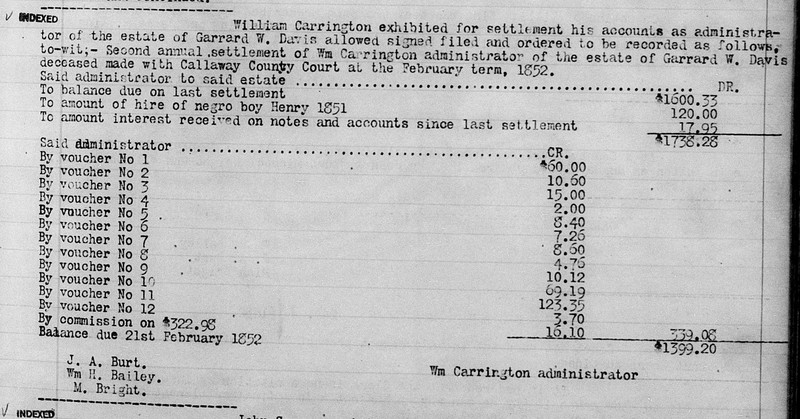 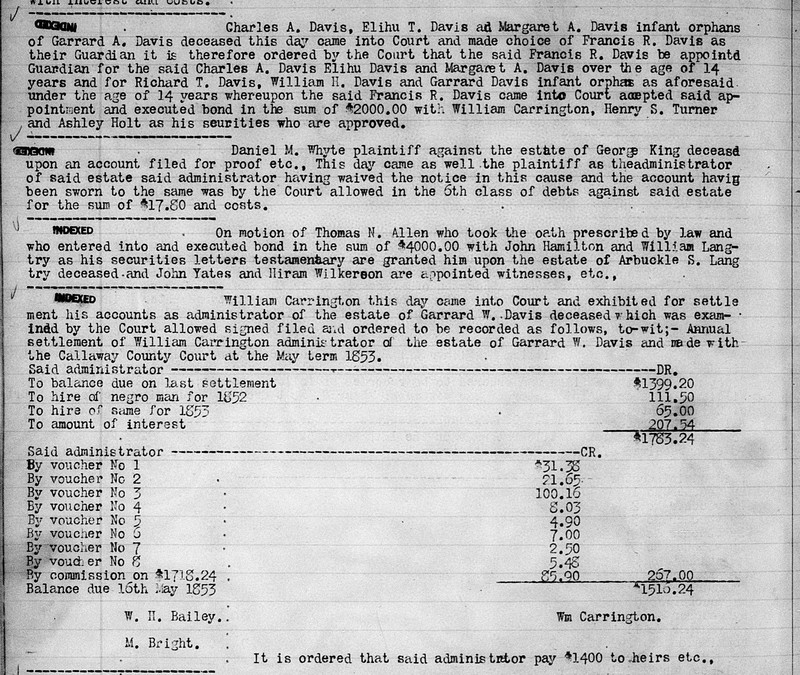 Over the course of the following 2 1/2 years Amelia was granted the use of certain court-specified slaves while the court demanded that she hire out others for the financial benefit of the estate. Each year, the account settlement lists the income from hiring out Henry Davis as added to the general estate fund to be divided between the heirs. 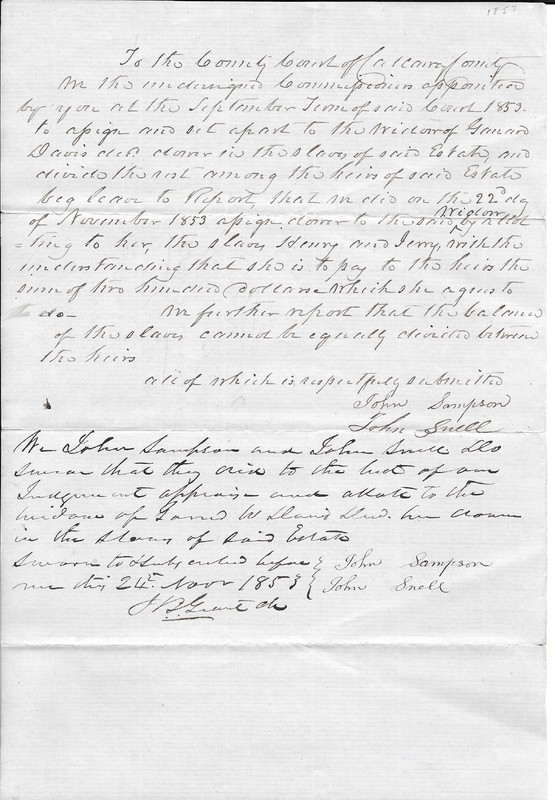 In September of 1853, the heirs of the Davis estate request that Amelia Davis is granted her "widow's dower" of the slavery of the estate. The decision is made in November and Amelia elects to keep Henry, the oldest, and Jerry, the youngest enslaved person. Yet her selection appears to surpass what the law affords a widow and Amelia is thusly required to pay $200 into the general estate fund to be distributed amongst the heirs for exceeding her dower of slavery.

Francis Davis returned to Callaway County in May of 1853 and filed to represent the underage heirs in all court filings. As a result of Amelia's selection in her slave dower, the court finds that the remaining three enslaved persons (Amanda, Joseph, and Jack) cannot be distributed equitably between the heirs and therfore are to be sold on January 2, 1854 at the courthouse in Fulton, Missouri. 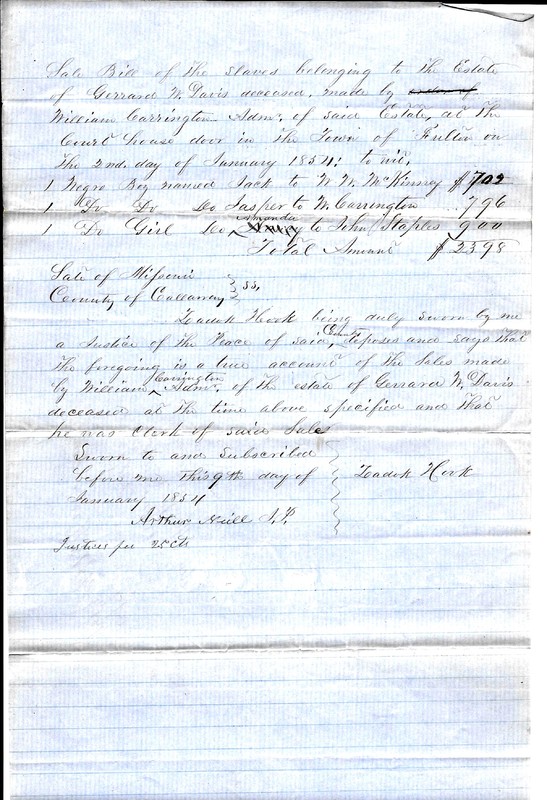 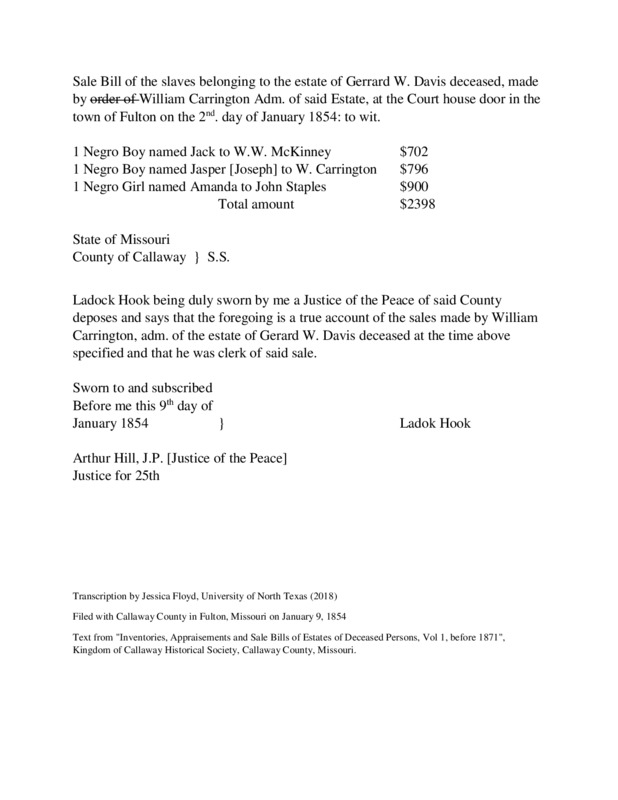 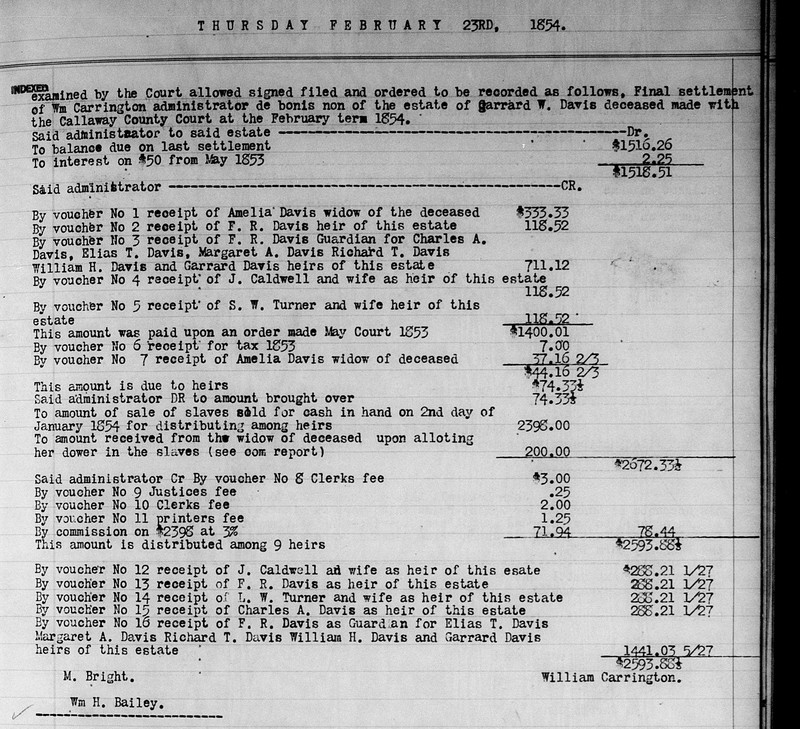 On January 9, 1854, a bill of sale was filed with the Callaway County Court Clerk for Amanda, Joseph, and Jack. The sale itself provided over $2,000 in revenue and marked the end of the probate period. On February 23, 1854, the probate was concluded and each heir received a portion of the remaining value of the estate.

The story of Amanda Davis ends firm documentation with the completion of the probate in February of 1854. It is possible that for reasons beyond our current research the sale of Amanda Davis to John Staples did not go through and she was therefore returned to the estate and likely to the patriarch thereof, Francis R. Davis. A second possibility remains that she was completely purchased by John Staples and then sold prior to 1857 to Francis Davis. Regardless of her path, it appears probable that she was the mother of Harriet Davis.

On the day that she was sold, Amanda would have been between three and four months pregnant with Harriet who was to be born in July 1854. This could be one explanation for her rapid increase in value from 1849 appraisement to the 1854 sale.

As shown through the collection of tax records below, Harriet and her mother were brought to North Texas with Francis Davis in late 1856. Harriet's mother became pregnant in the late summer of 1857 with her only recorded son, Gilbert who was born in the early half of 1858. By May of 1859, the mother of Harriet and baby Gilbert had died of unknown causes at an unknown time and was buried in an unknown grave near Pilot Point, Texas.

In 1881, Harriet Davis gave birth to her first recorded child, Logan. This was a pivotal point in the life of Harriet and her brother Gilbert as by 1882, both young and free people had moved out of the home of Francis Davis and onto lives of their own.

The story of the free life of Harriet Davis Shears begins here. 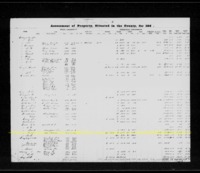 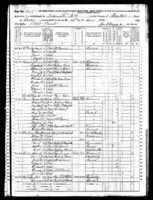 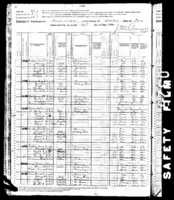