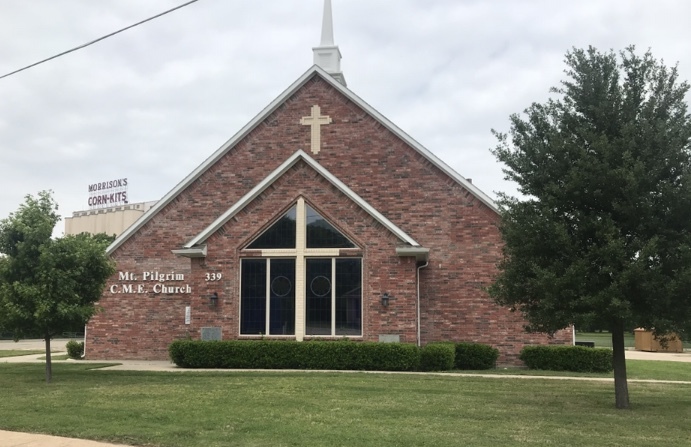 MT. PILGRIM CHRISTIAN METHODIST EPISCOPAL CHURCH Mt. Pilgrim Christian Methodist Episcopal (CME) Church, formally Mt. Pilgrim Colored Methodist Episcopal Church was organized in 1880, in Denton, Texas, outside the known boundaries of the former African American community, Quakertown. Presumably, Mt. Pilgrim was not forced to relocate like the other Quakertown churches, since the first known known locations of the church before Quakertown residents were displaced by 1923, were already in southeast Denton . Mt. Pilgrim held their first services on Allen Street, inside a tabernacle, which is a temporary primitive outdoor structure. After the Civil War, many African American congregations held church services in outdoor settings before building their own church. St. Emmanuel Baptist, in Denton, and County Line Baptist Church held their services outdoors before they constructed their own church building. After the construction of the first church was completed, in 1910, church services were moved to Robertson Street. Both of these locations mentioned above are south of McKinney Street, which is known to be the southern boundary of Quakertown.

The founding members of Mt. Pilgrim CME church are Shepard Middleton, George Hodge, Enoch Ammon and W. S. Jackson. Rev. Shepard Middleton was known to be a “circuit rider,” which is a Methodist ministerial role that requires preachers, particularly preachers from rural areas that would travel to multiple churches in an area to conduct church services. This was a common method of preaching across several denominations in the rural South during the late nineteenth and early twentieth centuries. 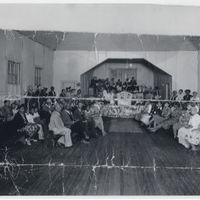 The earliest known conference that Mt. Pilgrim presumably attended outside Denton County was the North Western Texas Annual Conference of the CME Church in America, in 1883, hosted by St. James CME Church, in McKinney, Texas. According, to the conference minutes, there are not any exact matches of the founding members names listed. However, Moses Jackson was appointed to the “Lewisville and Denton Stations.” Presumably, this information from the conference minutes is referring to Mt. Pilgrim, in Denton and Lane Chapel, in Lewisville, since these were the only CME churches to have been organized in these towns before 1883. W.P. Huntley an active member of the African American communities in Denton and Pilot Point is listed to have attended the conference.

Mt. Pilgrim hosted some church-related events in the early twentieth century that were attended by CME members of North Texas. For instance, Mt. Pilgrim hosted a Sunday school convention, sponsored by the West Texas Conference of the Colored Methodist Church, in 1923. The Denton Record-Chronicle reports that 126 delegates were expected to attend the convention. During the Sunday school session, Dr. L.W. Smith, one of the leading lectures urged each delegate and pastor to stand by the educational movement in Texas. The promotion of education, particularly religious education became a cornerstone for the CME Church and other African American church denominations during the late-nineteenth and early twentieth centuries. 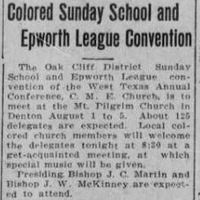 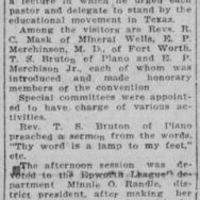