ST. EMMANUEL MISSIONARY BAPTIST CHURCH. St. Emmanuel Missionary Baptist Church, formally known as the Second Baptist Church of Quakertown was organized in 1906, at OldFellows Hall, in Denton’s African American community, Quakertown. This former African American middle-class neighborhood also consisted of other African American churches, including, Pleasant Grove Baptist Church and St. James AME Church. Rev. F. Scroggins became the first preacher of St. Emmanuel following the meeting at OldFellows Hall. Before the St. Emmanuel congregation constructed their first church building between 1906 and 1923, services were held at a tabernacle, which is a temporary primitive outdoor facility. Many African American churches organized after the Civil War usually held services in these types of structure before constructing their own church building. For instance, County Line Baptist in Pilot Point held their services in similar settings before constructing their first church building in 1874. Furthermore, St. James AME held services and church activities in members homes before constructing their first church in the 1880s.

African American churches in Denton County, including St. Emmanuel Baptist participated in events outside the immediate congregation. Although the Texas Historical Commission (THC) draft of the Texas Historical Marker for St. Emmanuel states that the church was organized in 1906; however, in 1896, the Denton County News reported a “meeting with the Emmanuel baptist church…at the old Masonic hall on south Elm Street.” If the Denton County News was referring to the same church as that was described in the THC, then St. Emmanuel Baptist may have organized at an earlier date. According to a Dallas Express article from 1919, Rev. Ayers, the preacher at St. Emmanuel Baptist conducted services at Ardmore, Oklahoma, which was one of his regular post’s. Preachers leading services outside their primary congregations was common during the late nineteenth and early twentieth centuries. Either way, few activities of St. Emmanuel are unknown before the 1920s. 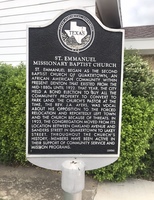 By the 1920s, the future of St. Emmanuel Baptist and the rest of Quakertown seemed uncertain. By 1920, the campaign for Quakertown’s removal, led by white city officials and leaders was in full force. After Texas Woman’s University (TWU), formally known as College of Industrial Arts (CIA) opened their doors in 1903, white Dentonites and state officials became increasingly concerned with the proximity of the white women’s college to the black community of Quakertown. To solve this problem, leading white organizations and leaders in Denton passed a park bond that officially ordered Quakertown residents to sell their property to the city to construct a park. Many Quakertown residents relocated to Solman Hill, in the southeastern portion of Denton, where the current church of St. Emmanuel is located on Lakey Street. 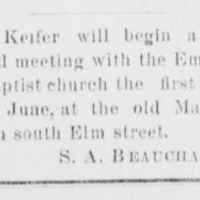 Meeting with at the Old Masonic Hall, 1896 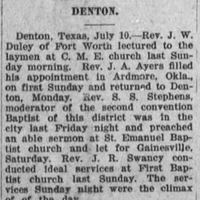 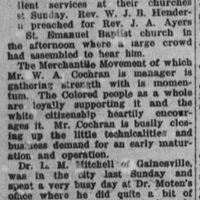