CHAMBERS COUNTY, ALABAMA: Founded on December, 18, 1832 and finalized in 1840 on land ceded by the Creeks in the Treaty of Cusseta, Chambers County is located in the east-central part of the state, on the banks of the Chattahoochee River creating the border with Georgia.  Its largest city, Valley, was the center of the region's textile industry during the nineteenth and twentieth centuries, marking a change from their primarily agricultural county specializing in cotton.

Prior to the Civil War, Chambers County was an agricultural community, but it suffered an economic recession during Reconstruction and the Panic of 1873.  In 1866 there were two textile mills established in what would become Valley, signaling the beginning of a transition towards an industrial manufacturing community, a move that was only encouraged by the proliferation of railroads and more mills.  Following the Civil War, a process of political and social realignments and readjustments happened throughout the South, and Alabama was no exception.  The Congressional Reconstruction period was marked by racial conflict and widespread terrorist activity in Alabama as Ku Klux Klan activity in the region increased. Congressional Reconstruction ended in 1874, when the ex-Confederate faction won the governor’s seat.

In the period that followed, known as “Redemption,” Ku Klux Klan activity and violence exploded in Alabama.  Using paramilitary organizations called “White Leagues,” white ex-Confederates used violence and intimidation tactics to oppress the African American population. These acts of terror, along with the collapse of the cotton farming economy, surely encouraged some African Americans to consider migrating from Chambers County to points west. 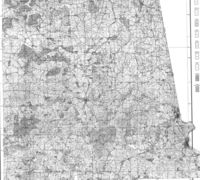