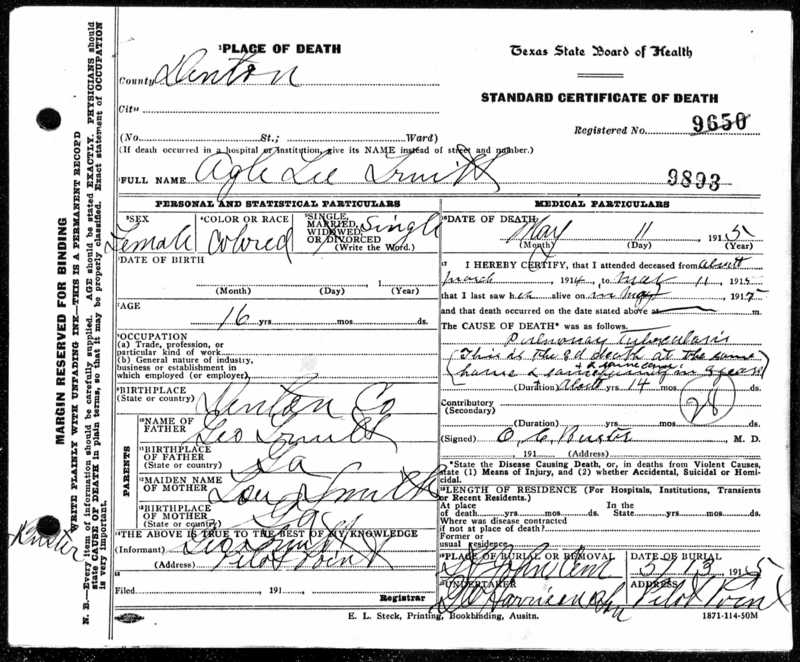 TRUITT, AGLE LEE “AGILEC” (1899-1915): Agle Lee Truitt was born in February 1899 in Pilot Point, Texas. She was the last of ten children born to George Truitt (b. 1859) and Lou Smith Truitt (b. 1862) of Georgia. While George and Lou’s three oldest children, Mike (b. 1877), George Jr. (b. 1880), and Lucy (b. 1882) were born in Chambers County, Alabama, the rest of their children were born in Pilot Point, Texas after the family relocated in 1883. The family came to Pilot Point with very little, but George Truitt rented land, owned one horse, and was able to make a decent living for his family as they worked as farm laborers under their own account. The family made a decent living as planters as they were later able to buy another horse and a carriage.

Tuberculosis ravaged Pilot Point in the 1910s, and the Truitts lost eight members of their family to the disease: Lou, Mike, Lucy, Amanda, Mary, John Willie, Ida, and Agle Lee. Agle Lee died at the age of sixteen, and the presiding doctor noted on her death certificate that she was the “8th death in the same home and the same cause and same family in 3 years.” Agle Lee passed away on May 11, 1915, and was buried alongside several family members in St. John’s Cemetery in Pilot Point, Texas. Agle Lee was survived by her father George, her brothers George Jr. and Leonard, and her sister Mattie. These remaining family members continued to live in Pilot Point and work as farm laborers.