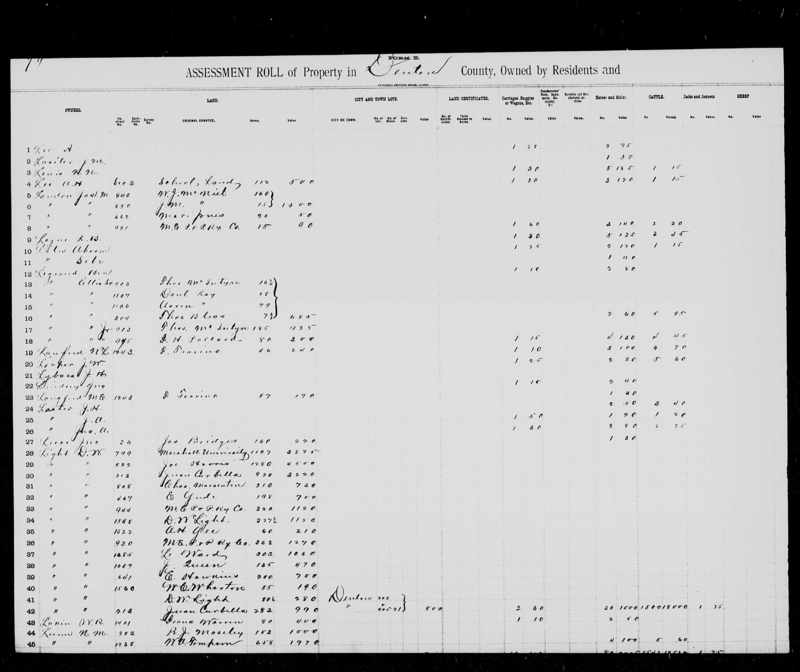 LYLES, ABRAHAM (1850-Unknown): Abraham Lyles was born in Georgia around 1850. Abraham later moved to Chambers County, Alabama, and lived two houses away from his future wife, Mary Varner. In 1870, Abraham worked as a farmer and provided housing for his relative, Sophia (1854). Abraham married Mary Lyles on April 3rd, 1875. From another marriage, Mary had four children; Seaborn (1862), Jennie (1865), Martha (1870), and Mary (1870). Together, Abraham and Mary had two children: Mike (1873) and Anderson (1876). By 1880, the blended family lived together in a rented house in Chambers County, Alabama where they worked as farm laborers and owned two mules. In 1884, the Lyles family moved to Denton County, Texas. There, the family lived and worked on 106 acres of land they shared with G.G. and J.W. Lyles. Abraham owned 100 acres of this plot which he purchased from Sylvester Williams. On January 20, 1886, Abraham bought two more acres of land near his property with John Burton and Joe Meddle. This small plot would later become the land on which St. John’s Baptist Church was built. In 1900, Abraham lived with his wife and three granddaughters; Mary Walker (1888), Luella Phillips (1893), and Zilla Phillips (1895). At this time, Abraham continued his work in agriculture and his granddaughter Mary attended grade school, likely at St. John’s. On May 2, 1910, Abraham Lyles died at the age of sixty as a result of Uremia. Abraham was preceded in death by his daughter Jennie Lyles Walker and his wife Mary Varner Lyles. Abraham Lyles was buried alongside his family members in St. John’s Cemetery in Pilot Point, Texas.

Abraham Lyles' Name is mentioned in the Cemetery Deed for St. John's