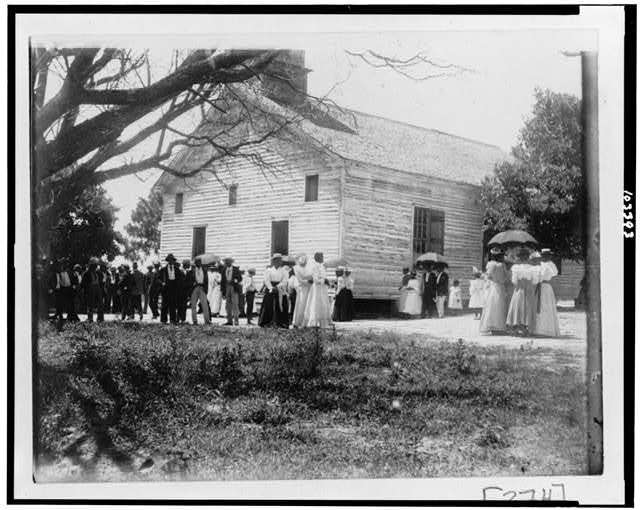 Photographs depicting African American southern churches and their parishioners in the late 1890s.

Church for African Americans following the Civil War served multiple functions within freedmen communities throughout the South. Churches in Denton County freedmen communities, such as St. John’s, located south of Pilot Point, stood at the heart of the black community. Churches served not only as a setting for worship services, but often also functioned as a school and place to host community events such as graduation ceremonies, ball games, and other church-related activities.

Since there is little evidence of the St. John’s community that survives today beyond the cemetery where members of St. John’s Baptist church were buried, this study attempted to gather as much information as possible about the African American churches that were organized during the late nineteenth and/or early twentieth centuries in Denton County. Collecting information about churches during this period provides an important window into what church life may have been like for the St. John’s community.

Churches in African American communities during the late nineteenth and early twentieth centuries served both practical purposes as a place for worship services but also served as place for spiritual refuge. Life for black Southerners was uncertain after the Civil War. With increased mob and lynch violence, and perpetual poverty, inflicted by Jim Crow, life was very stressful for African American in the South. The church in the African American community often served as an outlet for members of the community where they could express their sorrow, seek advice, find joy and community that could sustain them through the most difficult and challenging times.

Church, therefore, remained an important aspect of the African American community into the mid-twentieth century, and essentially galvanized activists during the Civil Rights Movement. Even today, life-time members of historic African American churches in Pilot Point express the importance of the church in their communities.