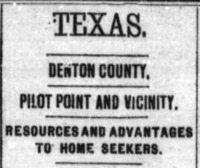 Politically, Denton County existed within the larger political trends of the state. Republicans dominated during Reconstruction, but were quickly replaced by the Redeemer Democrats. This began the reign of Democrats in Texas that would last long into the twentieth century. Democrats would only be threatened by the Populist movement for a short period of time before they absorbed the party and its platform. The Progressive Era split the Democrats over ideas of prohibition, but in the end they continued to have dominant control of the state.

Agriculturally, Denton County fit into the larger trends of the state of Texas. Denton County farmers were primarily white, but there were some colored farmers. Tenant farmers became the majority of the farmers in the county following the turn of the twnetieth century. Cereal crops, cotton, peanuts, and orchard crops were some of the primary agricultural outputs of the county. As a county in the wheat belt, Denton County was a significant producer of cereal crops, and was close to the main producing county for orchard crops and peanuts, implying that Denton County's production was, while not leading, significant. Additionally, Denton County was involved in ranching and other livestock raising enterprises.