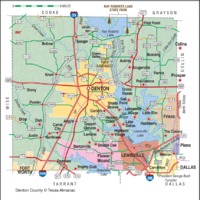 Anglo settlement of what became Denton County began with William S. Peters and several others obtaining a land grant from the Texas Congress in 1841. The land their Texian Land and Immigration Company settled became known as the Peters Colony. After that, Bridges’ Settlement (later Hebronville) was the next major county settlement. It was established in the southwest corner of the county in 1843.

Some settlers did come from the lower South to what became Denton County. Yet, in the years prior to the American Civil War, most settlers in the Denton County area came from the upper South and mostly due to the Kentucky-based Peters Colony. For instance, 40% of settlers gave Tennessee and Kentucky as their state of birth in 1850. Even though slavery was present in Denton County before the Civil War, it was not to the numbers of other counties in Texas or the larger South. There were 106 slaves in the county in 1850 and about 250 slaves in 1860.

Denton County itself was formed by the Texas legislature in 1846 from the much larger former Fannin County, and named for John Bunyan Denton – a Methodist preacher and lawyer of eastern Fannin County killed in a raid against Native Americans in northern Tarrant County on May 22, 1841. The county seat was moved more than once before being moved the fourth and last time to the center of the county. The land donated for this new county seat was established as the town of Denton in 1857 but was not incorporated as a county city until 1866. Denton’s first courthouse burned in 1875, and the new courthouse was replaced by the present structure in 1897.

Furthermore, Denton County was a predominately agricultural county during the 1870-1930 period, despite slow growth before the Civil War. The county had 4,780 residents and a little over 10,000 acres of improved land in 1860. Also, Denton County primarily consisted of subsistence agriculture and livestock prior to 1880 because the lack of water transportation meant the costs of transportation were up to ten times higher before railroads arrived. Then, major growth began after the Civil War. Almost 50 percent of county land was in cultivation by 1880, while Denton agriculture shifted from subsistence crops and livestock to rapidly increasing acreage of cotton and wheat during this 1870-1930 period. Cotton acreage increased from 29,785 acres in 1880 to 115,078 in 1920 – the same year 89 percent of the county was in cultivation. For wheat, acreage increased by more than 80,000 acres between 1880 and 1900. Denton County was ranked either first or second among Texas counties in wheat production from 1890 through 1920 and ranked tenth in wheat acreage and production in 1930. The population of Denton County had grown to 18,143 in 1880, and by the turn of the century it had reached 28,314. In 1930 the county population had increased to 32,822.

Railroads entered Denton County in the 1880s. The Texas and Pacific Railroad completed its tracks across the county from northeast to southwest in 1880, crossing through the town limits of Pilot Point, Texas. Another significant railroad was the Gulf, Colorado, and Santa Fe and crossed the county from south to north. The Dallas and Wichita Railroad came no more north than Lewisville in the southeastern part of the county.

Railroads may have made Denton County a significant agricultural producer, but they did not make the county an important commercial or manufacturing center. Therefore, population growth in the twentieth century depended particularly on other forms of transportation and on higher education – such as the county’s two large state-supported universities still in operation today. These universities are the University of North Texas and Texas Woman’s University, established as Texas Normal College in 1890 and originated in 1903 as Girls’ Industrial College respectively.

Denton County has continued to grow into the twenty-first century when compared to the previously mentioned numbers. A 2014 U.S. census placed the county’s population at 753,363, and the largest cities by population are Denton at 121,122 people and Lewisville at 100,237 people. The early twenty-first century has seen electronics and other light industries, horse-raising, and truck and missile manufactures as important elements to the local economy. In 2002 2,358 farms and ranches covered 349,000 acres of Denton County. Forms of transportation other than railroads have come to the county as well. Today, Denton County has the Interstate Highway 35 system running right through the center of the county, and forks in Denton to become Interstate highways 35E and 35W. The Dallas-Fort Worth International Airport, located just across the county’s southern border, has also played a part in Denton County’s growth and evolving transportation. Lastly, Denton County currently features the major lakes of Lewisville and Grapevine Lake.