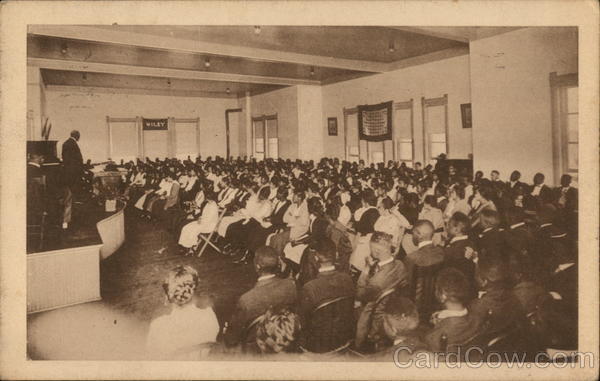 In an era where resources were limited and daily lifestyle changed consistently, it was a privilege to find information and gather oral histories from volunteers in the Pilot Point area, who were descendants of locals and helped us to tell the stories of many who would be lost in history otherwise. Unfortunately, the information for St. John’s School is very difficult to find and as of right now there have only been a few supporting documents that it existed. A map and a photo of John White’s father standing in front of the school are the only supporting documents of information for the school that we were able to uncover. Therefore, our team looked into other communities and gathered overlapping information and patterns to justify what school life may have been like at St. Johns in Pilot Point.

In Denton County, there was a large number of small, common school units with very few independent schools. Eventually, a centralized system with approximately twenty-five common and nine independent schools emerged. There was a steady increase of school enrollment, which coordinated with the population growth. In the late 1920s-1940s, there was a population flux due to people moving from rural areas to the city and then back again during the depression.

Many of the students from Pilot Point stayed in school until after the eighth grade when they would then travel to their county’s designated high school if they wanted to further their education. The school year was similar to present times, however, African American students attended whenever there was no farming to be done. A typical school year was from September to the end of May/June. Many students did not achieve higher education because they would have to travel, and once schools immigrated the students were often behind since they did not start school at the same time as the other children.

There was massive illiteracy and poverty, as well as white hostility in many different areas. However, it is understood that the rural, Pilot Point communities were primarily tight-knit and hostility arrived when new people came into town. The Freedmen's Bureau helped fund societies and churches, schools, funded teachers, and brought books from the North to Texas. African American communities were heavily involved in the church and education environments. The school was a key area in the communities as it was almost as important as attending church. Within many of the schools there would be days or times that were scheduled specifically for church related activities, such as devotion and studying bible verses. Through the church African Americans were living their daily lives and through both church and education communities flourished as "education became just as important as religion." It was not easy for students or families to attend events, since it was often that they had to walk for miles, take the bus, or catch the train to get from their house to the heart of the community.

The information gathered to seek out the undiscovered has been revealed through many newspapers, masters thesis’, oral histories, photographs, maps, and more. Within the newspapers we found the school dates, names, and events that occurred within the community. Meanwhile in novels and theses, we found maps and photographs. Oral histories were conducted by our classmates in the project and were used to be able to gather answers and confirm/deny any allegations that may be made. Through And Grace Will Lead Me Home by Michelle Mears, we were able to learn about life in the Austin, Texas Freedman communities.  Both masters theses, Equalizing Educational Opportunities For Children In Denton County(1937) and The Development of The Public Schools of Denton County, Texas, 1900-1942(1943), were able to produce knowledge of school attendance, salary, population, school districts, and more which aided us to the accusations presented. 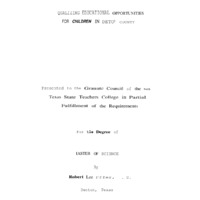 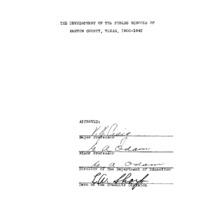 The Development of the Public Schools of Denton County, Texas, 1900-1942