Below are several charts detailing various aspects of farming and farmers in Denton County during the period from 1870 to 1930. From these compiled charts, a general sense of farms and farmers in the county can be developed.

Number of Farms by Acreage in Denton County

As can be seen in the chart to the right, following the rapid growth of the 1870s and the increase in the number of farms, Denton County farms grew in size as well as number. Starting in 1880, the largest proportion of farms were 100 to 499 acres, with the exception of 1920. Very few farms, comparatively, were more than 500 acres or less than 20. 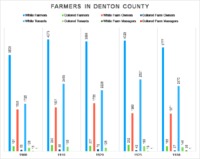 Many of the St. John's families consisted of farmers. Some owned the land they worked, while many others rented or worked as farm laborers. This aligns with the larger trends seen in the county. Additionally, one of the possible reasons that the families of St. John's migrated to Pilot Point was their tendany to agricultural practices and their ability to purchase land. Similar trends concerning tenant farming and farm ownership can be seen in Freedmen's Communities across the state -- for example, Bear Creek, Garden of Eden, Grant's Colony, Kendleton, Mosier Valley, and Mudville.