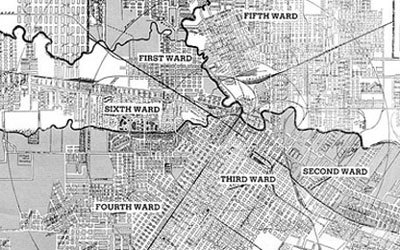 Once known as Freedmen's Town, the Fourth Ward in downtown Houston was one of its pre-eminent African American communities in the state. Like other communities formed during Reconstruction, its cultural significance was at its height before the mid-twentieth century, when it gave way to educational opportunities and night life that attracted whites and blacks. The Houston city charter of 1839 organized the city into four wards. The fourth is located just southwest of downtown Houston, along the south bank of Buffalo Bayou. It extended south of Congress Avenue and west of Main Street to the city limits. Initially it encompassed most of what is now downtown Houston west of Main Street, as well as the residential areas along San Felipe Street (now West Dallas). Today, the Fourth Ward is home to an almost exclusively African American community. 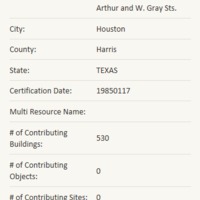 A few factors combined to facilitate the subsequent growth of the Fourth Ward's African American community. Its location on the San Felipe road placed it in the middle of the main route that most would take to enter the city of Houston. The land after the Civil War was ready to be divvyed up by former plantation owners for the former slaves to purchase off their hands. Finally, the Fourth Ward provided a home to early African American religious and educational institutions, with the area attracting Houston's two most important churches, Trinity Methodist Episcopal and Antioch Baptist, after the Civil War. The Fourth Ward's role as a center of education grew in 1870, when the various Freedmen's Bureau schools in the city consolidated at Gregory School, the first public school for colored students in Houston. It would eventually also house the only black high school in Houston (Colored High School, then renamed Booker T. Washington High) and their very own college, Houston College or Houston Baptist, located within in the Fourth Ward. The development was enough for some to call it "Houston's Harlem."

As the African American population of Houston grew around the turn of the 19th century, rapid growth in the Fourth Ward began to concern residents due to the rising rents and crowded living conditions. The density of the area led to both tension and a riot in 1917 that took the lives of servicemen and civilians alike. Then development began to eat away at the community as well, with new eminent domain laws in 1937 and the 1939 allowing for the San Felipe Courts development project (now known as Allen Parkway Village). Even with protests and lawsuits from the community, the developments cut through for sake of progress. The Gulf Freeway and other projects continued cutting through the Fourth Ward, until 1985 due to protection granted by the National Register of Historic places, stopping the use of federal funds to destroy its structures. Redevelopment continues due to the limited ability of the Fourth Ward to expand, with renovations made when possible. The community has changed from the conception, with hope now turning towards how development in the area will help incentivize people to come back. As a reflection of these times, the area goes by Midtown more than the historical term Fourth Ward. The memory of Freedmen's Town lives on, even if the original vanishes piece by piece.