Freed on June 19, 1865, African Americans in Texas quickly faced the harsh realities of the life that awaited them. Generally offered the option to remain on the grounds of the plantation where they were enslaved, many freedmen quickly disregarded that option and set forth to make a new life for themselves. Once the freedmen made the decision to leave, they followed several general settlement patterns throughout the state. Those who chose to settle in urban areas, settled as far from the center of town as possible hoping to maintain their independence from whites while also taping into the economic structure provided by the urban environment. Those who settled in urban communities, such as Deep Ellum, Quakertown, and the Fourth Ward, often worked as laborers in industrial jobs in the region. 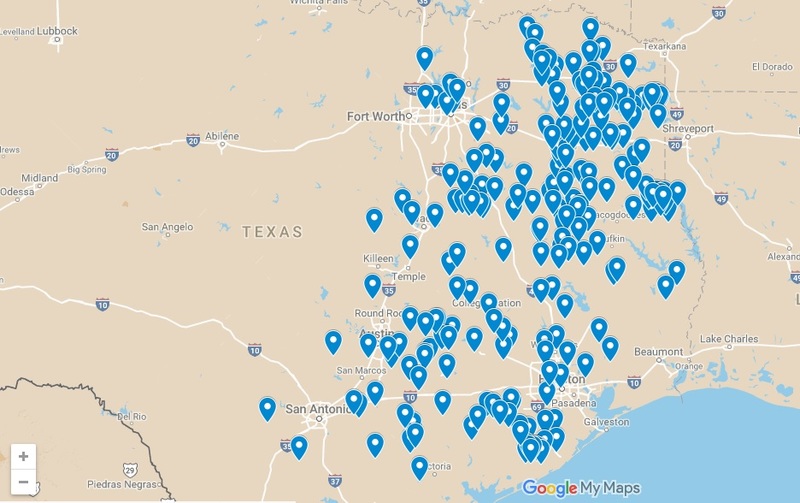 A map of every freedmen's community discovered during our research, which is undoubtedly incomplete.

The second major settlement pattern occurred when freedmen chose to settle in rural areas. Like those that settled in urban areas, freedmen wished to maintain autonomy and possess property, but the ways that they accomplished those goals differed vastly in the rural regions. Typically, freedmen gained property in rural areas in one of two ways. First, on some occasions freedmen families were either gifted or purchased property from their former owners, and they chose to remain on the land slowly building a community over time, Grant's Colony being a prime example. Far more common however, the freed slaves would quickly vacate the area and head into the wilderness and begin to form rudimentary squatter communities either on public or private land that received little-to-no use from either the owners or the state government. These squatter communities made up many of the rural freedmen settlements, and they often settled on land deemed less than desirable by local whites. Primarily settled on land in densely forested areas and in the bottomland around rivers, they were often in danger of floods and other natural disasters wiping them out. Over time, these communities slowly legitimized themselves by gaining title to the land via the legal system, or they lived out their existence more or less extralegally.

Community life inside the two major types of freedmen settlements bore many similarities to one another in social and political life but differed in the economic makeup. Many communities were organized around a church that operated out of individuals’ homes until a standing building was constructed. Major denominations in Texas consisted of African Methodist Episcopal, Colored Methodist Episcopal, and Baptist churches, and these served as the centerpieces of the community hosting events, funerals, and often serving as rudimentary schools. Additionally, both community types sacrificed mightily to create opportunities for education after emancipation. The Freedman’s Bureau  supported early education efforts, but after the Freedman’s Bureau ended in 1872 the organization of schools fell to individual communities. However, almost every community offered some level of education to their residents, and would, on occasion, send those who desired more education to larger settlements or towns to receive it.

Economics is where the two freedmen settlement types diverge. Urban communities typically had a much more diversified economy with individuals working as craftsmen, in local white homes as servants and maids, in factories, and even as day laborers on local farms. Rural communities were more focused on subsistence agriculture with limited cash crops to supplement their incomes. Sweet potatoes, peas, peanuts, and corn served as the primary sources of food for rural freedmen communities, and cotton and (in other parts of the state) sugar cane for syrup were the primary crops grown for cash. The crops grown differed from settlement to settlement, but the crops were hardy, which provided the necessity of subsistence for the communities. Additionally, rural communities frequently maintained semi-feral livestock throughout the community such as: chickens, ducks, geese, guineas, turkeys, and hogs. These animals usually roamed throughout the community with little to bind them there except for food. Both types of communities also featured specialized workers who performed tasks, such as blacksmithing, for those within the community with the aim of keeping them separate from the white communities around them.

Life in freedmen communities maintained a similar pattern of survival during the decades after freedom came for slaves in Texas, but several long-term problems plagued the rural ones, which ultimately led to their collapse after the conclusion of the Second World War. First, as Texas began to industrialize and urbanize in the postwar years, increased economic opportunities generally pushed more and more freedmen from their historic settlements and into the cities. Additionally, increasing political clashes with local whites  played a role in driving the freedmen out of their settlements as local land became increasingly consolidated among individuals. Finally, freedmen communities had always possessed a finite amount of land, which never truly increased after the settlements came into existence. As successive generations were born onto the settlements, land split into smaller plots as older generations divided their land among their children. All these factors played a part in the decline of these communities, and ultimately resulted in the collapse of many of them in the postwar period.

Freedmen communities in Texas were diverse and covered a large portion of the northern, eastern, and central sections of the state. No two communities are completely alike, but they all share a similar ideology underscoring their creation. Further, they come into existence and disappear during roughly the same timeframes and possess similar issues from one community to the next.