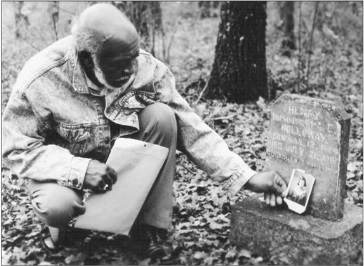 Eli Sledge places a photograph of his aunt Analiza Holloway on the headstone of her husband, Henry Holloway, at St. John's Cemetery (circa 1998)

The last recorded burial took place at St. John’s Cemetery in 1938. Since then the ways that it has been kept, abandoned, remembered, found, and taken care of have changed greatly over time.

In addition to the surveys that were conducted that show the ebb and flow of the cemetery in and out of the community's memory over the years, there have been attempts to clean and restore the cemetery to respectable condition which shows the same. One such occurrence was during the 1993 survey, when it was determined that cleanup had begun at the cemetery and would be completed by the middle of 1994. Again “in 1997 and 1998, local residents organized their own cleanup, restoring the cemetery, repairing headstones, trimming back brush[,] and putting up a new entrance sign, according to county records and newspaper stories.”

Sometime between 1938 and 1998, prior to its rediscovery, members of the community began referring to St. John’s Cemetery as the "Old Slave Cemetery." Although no evidence details definitively the reasons for the new moniker or when it the name changed, it stuck. Some of the first people interred at the cemetery had been enslaved, but most were born after emancipation. In any case, it is unclear where and when the name originated, but by 1998 it was common enough that someone--either a Boy Scout troop or a nearby landowner, according to two commonly repeated stories--created a sign that read "Old Slave Cemetery" and placed it above the gate to the property.  With the new name, memory of the St. John’s community that had created the cemetery in the first place faded further from the collective memory.

In the 21st century the St. John’s cemetery has garnered newfound attention from those who wish to preserve its legacy and learn about the lives of the African Americans who are buried within its confines. Willie Hudspeth, president of the Denton County NAACP, led a group of volunteers on weekly work trips to begin clearing the underbrush that had reclaimed the cemetery. In 2016 Denton County set aside $20,000 for restoration and revitalization of the cemetery. The allocation of funds by the county government indicates a shift in the collective attention toward historical places in Denton County. Coming nearly a century after St. John’s Cemetery became inactive, this recent attention allows for discourse surrounding the collective memory of African Americans and their communities within Denton County.

One reason the cemetery may have faded in and out of people’s memory over the years may relate to the name change. Until 1938 the cemetery was well-taken care of and stayed on the front of people’s minds. However, after St. John's Baptist Church disbanded and its members scattered, the cemetery started to fade from people’s consciousness. Families returned to tend to the plots of loved ones less often, then not at all. Brush grew across gravesites and cattle may have gotten through fences to trample the sacred ground.

Confusion over who owned the land the cemetery sits on only served to obscure its memory. After St. John's Baptists Church disbanded and stopped paying property taxes on the site, ownership of the land has been in dispute. There are no records in the Denton County Courthouse listing anyone as owning the property, so it is easy to see why no one was responsible for the property and its upkeep from 1938 until recently.

If it is difficult to trace the ways that the cemetery has been remembered, it has proven next to impossible to to reconstruct the history of St. John's Baptist Church. Despite our best efforts, we have found no archival records that would help us better understand the church as as an institution. There is even discrepancy regarding where the church was located.

Working within these contraints, we have tried to find people who had family members that lived during the pertinent period and/or were buried in the cemetery, and people who have information to share with us regarding church life, school life and community life in and around Pilot Point. We have recorded oral histories with several men and women who were generous in sharing that information.

This section also includes videos, photographs, newspapers clippings, and anything else that will explain the historical memory of St. John’s. This section explains as best as possible what happened to St. John’s church over the years, what it was like to be part of St. John’s church, its history and ultimate collapse. In addition, this section describes modern interest in the cemetery over time as it transformed from St. John’s Cemetery to the “Old Slave Cemetery” and back to St. John’s Cemetery. Finally, this section focuses on the interest in the cemetery to clean up and maintain it in a manner that shows respect to the African Americans who are buried therein.