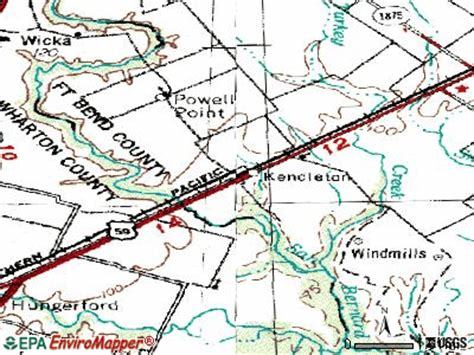 Kendleton can be found in Fort Bend County, fourteen miles southwest of Rosenberg and at the intersection of US Highway 59 and Farm Road 2919. Following the Civil War, plantation owner William E. Kendel began to divvy up his land into farms and sell them to his former slaves. In 1874, he sold his land in bundles of 100-acre plats for a dollar to dollar-fifty an acre. Since his former slaves could not read or write, he also participated in drafting their land deeds. In both instances, the community that Kendel helped honored him by naming the town Kendleton. 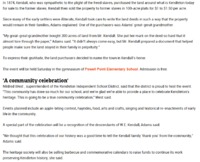 The town would quickly start to grow, with both railroads and postal services introduced to the town through the early 1880s. The school system grew with the freedmen community, both in the corporation of Powell Point Elementary and its schools for the black and white populations. While the town has become diverse since its initial conception, the community still has pride in its African American roots. The population remains primarily black even with its increased diversity, according to info from the 2000 census. The descendants of the former freedmen hold immense pride for what the land and town that their ancestors built. In 2006, the chairwoman of the Kendleton Heritage Society, Marjorie M. Adams, conducted a festival to help commemorate their town. From simple farming land to a moderate city, the town has grown. In Adams' words, "This festival will help keep our heritage alive for the younger generations."