Below are several charts and newspaper clippings detailing livestock and livestock products in Denton County and Pilot Point from 1870-1930. 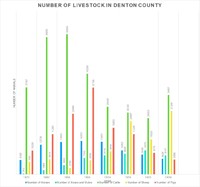 Number of Livestock in Denton County

Ranching has been a major Texas industry for over 300 years, specifically cattle ranching. The end of the Civil War brought increased prices for cattle, and cattle drives to demanding markets began to flourish. However, as fences began to enclose the ranges and railroads reaches the sources of cattle, drives were no longer needed by the turn of the twentieth century. Ranchers faced hard times during the Panic of 1893, but World War I brought increased demand for livestock. However, the 1920s brought deflation and ended with the Crash of 1929, ranchers needed bailing out by the federal government in the 1930s due to these issues.

Swine farming was popular among early Texas settlers, and hogs were raised in a similar manner to cattle. By 1910, Texas was the fourth in the nation for swine production, and by 1914 had spread to every county in the state. Production expanded from this point until 1920 due to an abundance of feedstuffs. By 1949, Texas was the eigth largest swine producer, and first outside of the corn belt.

In Denton County, swine production reached its peak in 1900, but then began to decline through the rest of the twentieth century. Thus, while Denton was raising and producing swine, it can be assumed that it was not one of the leading producers in the state.

While sheep herding shifted from the South Texas to the Trans-Pecos region by the turn of the 20th century, Denton County consistently had sheep from the 1870s to the 1930s. Denton County may not have been one of the primary producers of sheep and wool, but it did contribute to the state's overall production.

The dairy industry in Texas was for the most part a subsistance industry. However, Texas farmers did supply the majority of milk and butter in the state. By 1900, there were 12 creameries in the state, and by 1914 there were approximately 100. Despite this, the majority of butter was still produced and consumed on farms. It can be assumed that these trends were similar in Denton County as well, and that the majority of butter produced in the county was on farms and the dairy products were consumed locally.

Through various records, it can be seen that some members of St. John's owned livestock. While these were not in significant numbers, there was ownership of livestock. Thus, it can be assumed that these were for subsistance purposes, rather than ranching. Similar trends can be seen in the Freedmen's communities of Garden of Eden and Mosier Valley. 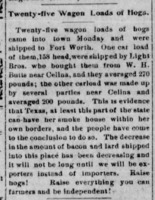 Newspaper clipping from 1896 discussing the profitability of hogs.

Newspaper clipping from 1910 discussing a hog demonstration car in the area.