Manufacturing in Texas has had the benefits of a state with rich and varied natural resources, geography that encouraged population growth, and developing transportation networks, such as railroads and deep-water ports. Prior to 1900, Texas’ manufacturing industry came in one of two forms. One, those that were centered on a source of raw materials — lumbering and stone cutting — or two, those that produced goods for immediate use by the local market — flour and grist mills. Two of the earliest industries in Texas that remained leading industries through the early development of manufacturing were the lumber and flour and grist mill industries. The first sawmill in Texas was most likely built in 1825 near San Augustine, and the first gristmill was probably in San Antonio. By 1839, other industries such as natural cement, furniture, tin, and sheet iron products had developed, and Galveston served as Texas’ primary industrial center. When settlements reached the Blackland and Grand Prairies, quarrying and stonecutting spread northward to take advantage of the limestone found there. As early as 1844, sugar cane was being used to manufacture sugar. The annexation of Texas in 1845 stimulated settlement and pushed manufacturing inland — by 1857 there were four flour mills in Dallas. During the Civil War, Texas developed several war industries such as an ammunition factory in Austin. After the war, the economic stagnation associated with Reconstruction was short-lived in Texas. The total number of wage earners went from 3,449 in 1860, to 7,927 in 1870, and 12,159 in 1880. On a similar note, the total value of manufactured products in 1860 was greater than $3.2 million, over $5.2 million in 1870, and over $7.7 million in 1880. 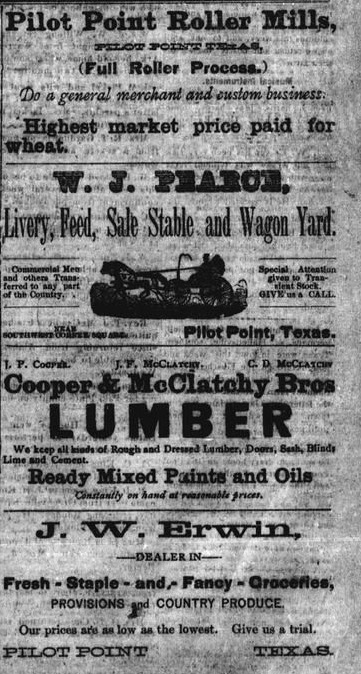 By 1870, there were 4 manufacturing establishments in Denton County with nine persons employed and almost $30,000 invested. These establishments produced over $34,000 worth of products.

From the end of the Civil War until the turn of the twentieth century, lumber and flour and grist milling were the principle industries in Texas, however the cottonseed oil industry was quickly catching up. The first cotton mill in Texas was in Fayette County in 1867, by 1900 the industry was second in the state and produced over $14 million worth of products.

The first decade of the twentieth century saw the number of industrial wage earners almost double and the value added by manufacturing more than double. The variety of manufactured products continued to rapidly increase in Texas until the Great Depression. From 1910 to 1920, slaughtering and meat packing developed rapidly with a value of over $42 million in 1909 to a value of over $125 million in 1919. Additionally, during this time, several cotton mills were built, and the clothing industry rapidly expanded — especially in Dallas. During the 1920s Texas saw the creation of its first dairy factories, as well as the first poultry packing plants with nation-wide markers.

As the great Depression hit, Texas’ industry abruptly declined — payrolls and the value of products fell, and new industrial development stagnated. However, Texas was not as affected compared to older, more established industrial areas, and by 1940 industry had returned to a similar level as in 1930. At this point in Texas’ history, the largest industries were petroleum refining; meat packing; cottonseed; flour and other grain mills; oilfield machinery and tools; and bread and other bakery products.

By 1930, there were only 22 manufacturing establishments in Denton County, and 125 persons were employed. Annual wages dropped to just under $120,000, and the value of manufactured goods fell to $1.2 million.