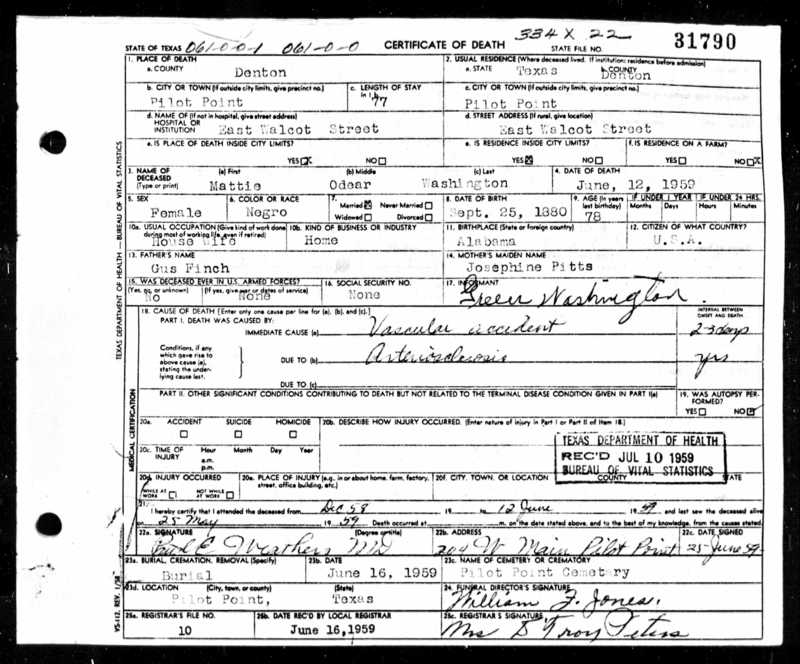 WASHINGTON, MATTIE FINCH (1880-1959): Mattie Finch was born in 1850 to parents Gus and Josaphine in Alabama. Shortly after her birth, the family moved to Pilot Point, Texas.  Mattie’s mother, Josaphine, died in 1892, when Mattie was only 12 years old. Mattie’s father married Mariah Combs that same year. Mattie’s father and new stepmother had at least four more children during their marriage, giving Mattie several half-siblings including Mary Finch in 1894.  In 1896 Mattie married Green Washington and was listed in the subsequent census records as a housewife. The couple had four children: Kate (1899), Martha (1902), George (1903), and Lincoln (1914). In June of 1958, Mattie's son George died of an apparent suicide. This must have taken a toll on her health, as she would die nearly a year to the day later, June 12, 1959, of a vascular incident attributed to arteriosclerosis.  It is not known where George is buried, but Mattie was interred at Pilot Point Memorial Cemetery with her father and stepmother.