From Little Dixie to the Lone Star 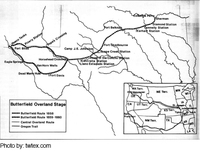 The Butterfield Overland Mail brought Little Dixie settlers to North Texas and thereby changed the composition of the Pilot Point population in the late 1850's.

Many migrants to North Texas in the 1850's came from Missouri via the Butterfield Overland Mail Route. In the middle and upper portion of Missouri lie fifteen counties colloquially referred to as "Little Dixie" for their propensity toward slavery. Little Dixie in-migrants were of Upper Southern origin, primarily from Tennessee, Kentucky, and Virginia. This westward path was blazed and popularized by Daniel Boone and a generation of frontiersmen and women shortly after the turn of the ninteenth century. The "rich and fertile timbered river-valleys and rolling upper prairies of central Missouri" met large navigable rivers and railroad development in Callaway County. This fueled the development of a slave-based economy by families that had previously not owned slaves.

Prior to the 1850's, the trip from Tennessee to North Texas was a six month long journey along rivers and trails which made the migration of a family both difficult and dangerous. While these rivers made travel possible they also impeded the settlement of North Texas until ferries were established along the Red River. Colbert's Ferry began operation in 1853, transporting travelers and migrants across the Red River from Bryan County, Oklahoma to Grayson County in North Texas.

When the Butterfield Overland Mail Route opened in 1857, families from the heart of central Missouri (Callaway County) traveled by stagecoach across Colbert's Ferry and into Denton County. This changed the composition of the population of Pilot Point in less than three years. In 1850, there were 185 persons living in Denton County who were born in Missouri. By 1860, the Missouri-born population had exploded to 880.

Of the slave-owning population in Denton County in 1850, four out of the five slave owners came to Texas via Little Dixie. 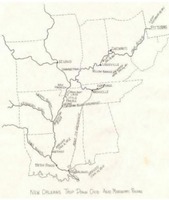 From Skipper Steeley's "Six Months From Tennessee", this image depicts the navigable rivers by which settlers traveled to North Texas prior to the opening of popular trails such as the Butterfield Overland Mail Route and the Pony Express.

The Boone's Lick trail carved a path through central Missouri in 1831 stopping in Fulton, less than two miles from the settlement of the Davis family in the same decade. 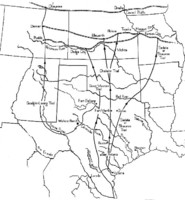