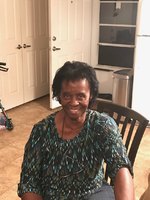 Pearlie Mae Simpson was born and raised in Pilot Point, Texas. She is the daughter of Willie Pearl Jackson. She attended school on Burke Street near the St. James Church until 8th grade, and then was bused to Denton to Fred Moore High School where she graduated in 1963. From there, she attended and graduated from Texas Woman's University. She then worked in Sanger as a nurse in a nursing home and also attended paramedic school. She then got married and had two kids. Ms. Simpson has been an active member of the Pilot Point community by driving a Pilot Point school bus, working as a school nurse, and was also the longest serving member on the city council in Pilot Point. She has also helped with the restoration efforts of the St. Johns Cemetery.

Pearlie Mae Simpson gives details about her family living as Pilot Point natives. (0:58-4:58) Growing up in Pilot Point, she expresses her favorite pastimes as a child, going to church regularly, and working in the cotton fields. She also expresses how school was an important aspect of her life, stating, “I wanted to keep going, so I did , I kept going, and I graduated” despite the hardships. (9:15-9:21) Ms. Simpson also mentions her visitations to the St. Johns Cemetery, her involvement, and the importance of the clean up efforts. She states, “It’s something that we need to do as human beings, the dead are dead, but they are still a part of us” (25:30-25:37)