An article from the Pilot Point Post Mirror in 1888 discussed the views of a local farmer on immigration. He was of the opinion that massive immigration was not to the benefit of the community and would only fill the country with "thieves, robbers, paupers, and tramps." He states that immigration would only benefit large farmers who could rent their land, lawyers for litigations, and lighting rod sellers, but it would in no way benefit the "toiling masses." Despite this, a later article promoted the local immigration commitee's meeting that would discuss the immigration plan of the state and the benefits that it would bring to the citizens of Pilot Point. It urged readers to "secure their share of the immigrant capital" and that "prompt action" was required.

In 1892, Governor Hogg visited Denton to give a speech regarding his re-election campaign. The Post-Mirror ran an article discussing his speech as well as their views on him. It stated that his speech "had the elements of honesty and common sense and was free from sophistry, just such a speech as carries conviction to all honest and unbiased hearers." Such a description showed how while the Post-Mirror might have been attempting to seem unbiased themselves, they were supporters of Hogg and wanted to pass their views along to the residents of Pilot Point.

In 1894, a local resident wrote a letter to the editor of the Post-Mirror recounting their attendance at a recent speech given by prominent Populist "Cyclone" Davis. The letter stated that Davis spoke in a "fearless and uncompromising manner, not with that oily and slick rhetorical manner that our politicians of today try to dupe the great masses of people with." It then goes on to say that something needs to be "done to relieve the oppressed and downtrodden people," and that politicians like Davis were the answer. This article shows the appeal of the Populist party to residents of Pilot Point, and the efforts that his supporters made to preach his message to their community. 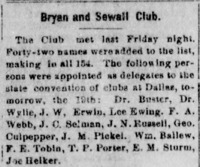 In April 1896, the Post-Mirror ran an article announcing a "mass meeting" of Populists in Pilot Point. However in September, the Post-Mirror ran an article discussing the local Bryan and Sewall Club. This club supported the Democratic presidential candidacy of William Jennings Bryan, and had a total membership of 154 at the time of the printing of the article. This shows the disintegration of the Populist party when Bryan was the candidate for both the Populist and Democratic parties. Despite the fact that Bryan was the Populist nominee, as well, Pilot Point supported his candidacy as a Democrat rather than as a Populist.

An earlier article from the Post-Mirror discussed the Republican national nomination of McKinley for president and their platform supporting the gold standard. The editors stated that they were "unalterable opposed to every measure calculated to debase [their] currency." These views indicate that there was little Republican support in the area, especially over these issues.

As early as 1895 prohibition was a topic of conversation in Pilot Point. The Post-Mirror ran an article stating that the newspaper was "opposed to the liqour trafic [sic], because of its degrading effect upon the human race," and was in support of any measure that would cause the "final elimination of the evils of liquor drinking." While this may not have been the views of the majority, or even a significant portion of Pilot Point residents, the fact that it was included in the local newspaper shows that there were differing opinions on the subject. Furthermore, it is of significance that this opinion is stated in the newspapers, since this was the means of distribution of ideas at the time.

The Pilot Point Post-Signal ran an article in 1911 discussing the efforts at state-wide prohibition. The article gave the opinion of the editors who believed that "even if state-wide prohibition is not a complete sucess at first, it is a move in the right direction." It felt that "the advance of society and [their] wellfare individually" depended on the elimination of the "great evil" that was alcohol. This shows that in Pilot Point there was as least some support, if not a large contingency of supporters, for prohibition efforts.