The Republican Party began in Texas in Spring of 1867 in a response to Congressional Reconstruction. Republicans not only supported, but embraced, the ideas of Reconstruction and the inclusion of African Americans into their political party. Republican support primarily came from antebellum Unionists, recent immigrants from the North (carpetbaggers), and African Americans. Congressional Reconstruction replaced former Confederate officials with Republicans, giving them control over voter registration, and the state constitutional convention. However, during the constitutional convention, the Republican party disintegrated into two factions – Conservatives advocating the state’s actions while members of the Confederacy and Radicals declaring any actions taken during secession null and void. In the election, the Radicals took control of most offices, including governor. Election returns showed that Republican support was strongest in majority black counties as well as areas that had shown Unionist sentiments before the Civil War.

Republicans took over Texas and instituted Reconstruction ideals, much to the dismay of Texas Democrats. As a result, Democrats took over the Texas State Legislature in 1872, and the governorship in 1873. After this point, Republican victories only came from counties with large black population – statewide, Republicans were limited to less than 30% of the vote.

Between 1896 and 1950, Republicans elected only three candidates to the United States House of Representatives and no Senators, and in the Texas State Legislature there was never more than one Senator or two Representatives. During this time, the Republican voter based switched to the Panhandle, those that supported oil and gas interests, and urban counties with a middle-class, professional, business group.

From 1950 to 1978, the party transformed, the period was marked by a growing presence at the polls but with few Texans who actively identified with the party. Republican presidential candidates polled consistently at more than 48%, except in the 1960s. Additionally, Republican gubernatorial candidates improved as well, increasing from 10% of the vote in 1954 to approximately 45% in 1962 and at least 40% in the elections following. This can be attributed to the changing demographics of Texas – the state became more urban and the party’s conservative ideas attracted oil and gas industry supporters. It was not until the election of 1978 that the Republican party took a more permanent role in the state with William Clements becoming the first Republican governor since Reconstruction.

From 1836 to 1952, the Democratic Party was dominant in the state of Texas, however, after this time it faced growing opposition from the Republican Party. Since many Texas settlers came from the American South, they brought their political allegiances with them, namely ties to the Democratic Party. During the Civil War these allegiances aligned Texas Democrats with the proslavery wing of the party in the Confederacy.

Following the Civil War, Democrats temporarily lost power to the Republican party during Reconstruction, but regained control by 1872. Despite their resurgence, Democrats still faced internal strife and the party began to have factional divisions. The Farmers’ Alliance and Populist Party further complicated matters as sometimes the Democratic party worked with them, or further split the party. However, by 1896 the Democratic party had absorbed most of the Populists to the adoption of Populist platforms.

During the Progressive Era, the Democratic Party split into progressive and non-progressive factions. The progressive faction supported prohibition efforts and governmental reform. Following the election of President Wilson in 1912, Texas Democrats began to take a significant role in national politics.

During the 1920s Texas Democrats began to shift, like Democrats across the South, from a social and cultural agenda to one of business progressivism – the expansion and increased efficiency of the government. The election of 1928 split the Democratic party in Texas over issues of prohibition, and the Klan created its own faction.

During the New Deal, the Democratic party split once again – between those favoring John Nance Garner and those supporting the New Deal. Factional infighting between conservative and liberal Democrats continued through to the 1970s, as the Republican party gained strength in Texas. By the 1990s, Republicans had regained control of the state.

Socialism in the state of Texas, became a prominent player in local, state, and national politics during the last decade of the Nineteenth century. Further, from approximately 1898 to the mid-1920s two separate and distinct socialist parties formed in Texas. However, despite the two socialist parties within the state, they have all maintained common goals: improvement of labor conditions, a more democratic government, tax increases on wealth and land accumulation, and government control of major infrastructure. From 1898 to 1914, the Social Labor Party nominated candidates in gubernatorial elections throughout Texas with limited results. However, in 1904 a coalition group that included former members of the Populist Party formed the Socialist party of Texas, which peaked in gubernatorial elections by supplanting the Republican Party as the second largest in the state from 1912 to 1914. By the early 1920s, the Socialist Party of Texas had stopped nominating individuals in state-wide elections and continued its decline until the 1980s when it disappeared.

Percentage of Votes for Governor by Party 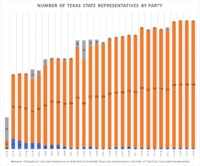 As can be seen from the charts above, Democrats dominated the state during the time period that St. John's existed in. While other party's may have played a role in politics, they were not significant, and only lasted for a limited time. However, the presence of these parties shows the percieved need for other political options, other than the Democrats, throughout the state.