The Farmer's Alliance and the Populist Movement in Texas 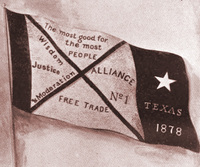 Illustration of the first banner of the Southern Farmer's Alliance.

Farmers faced hardships following the Civil War due to falling prices, high credit and transportation costs, and a national depression in 1893. These events caused farmers to organize into groups that promoted the interests of farmers. In 1872, the Farmers’ Alliance was established in Lampasas County, Texas and later merged with the Louisiana Farmers’ Union to create the National Farmers’ Alliance and Industrial Union of America — the Southern Alliance. Other organizations, such as the Colored Farmers’ Alliance. also began to form around the same time. All of these organizations promoted paper money, the unlimited coinage of silver, government control of the railroad and telegraph, lower tariffs, a graduated income tax, the secret ballot, and the direct election of U.S. senators. Further developments led to the formation of the People’s Party.

The Populist Movement in Texas:

In April 1892, the Jeffersonian Democrats (who split from the larger Democratic party in 1890) joined the Populists to create the People’s Party in Texas, which would also be known Populist Party. The Populist Party’s major platform planks were the preservation of land from large and foreign landowners, regulation of transportation, and an increase in the amount of money in circulation. Additionally, at various times the party supported tax reform, the regulation of trusts, popular election of officials, direct legislation, and proportional representation. Southern support of the party came largely from the Southern Farmer’s Alliance.

In Texas, the history of the People’s Party benefitted greatly from the grass-roots communication structure developed in the state. Movement towards a third party began in the late 1880s but culminated in 1891 with the formation of the Texas People’s Party in Dallas. In 1892, the Populist Party began nominating candidates for public office and they posed a serious threat to Democrats. It posed enough of a threat that the Democratic Party in Texas began to advocate free silver as a response to the Populist plank of a subtreasury system.

Despite this, the Populist party survived to 1894 and elected twenty-two Populists to the state House of Representatives and two to the state Senate. Additionally, in eight of the thirteen national congressional elections, the Populists polled at over 40%, and Nugent received approximately 36% of the vote (11% more than the previous election). However, the Populist party did not have the same type of success at the national level – a major blow to the party since monetary reform could only be achieved at the national level.

National chairman, H.E. Taubeneck, urged the party to compromise and appeal to bimetallists – those that supported the coinage of gold and silver. However, most Texas populists disagreed with Taubeneck’s views and were appalled when noted Texas Populist, James H. “Cyclone Davis, sided with Taubeneck. However, Taubeneck’s plans went awry when the Populist party nominated free-silverite William Jennings Bryan for president in 1896. Bryan was also the Democratic nominee for President which began the demise of the Populist Party.

Through the absorption of the Populist party’s agenda by the Democrats, the return of prosperity in 1896, and conflict within the party itself, the Populists’ power in Texas was effectively null by 1900. Despite its ultimate failure, its ability to voice the concerns of Anglo small farmers, blacks, and labor was integral to Texas politics at the turn of the twentieth century and in the rise of other reform groups in Texas later in the century.