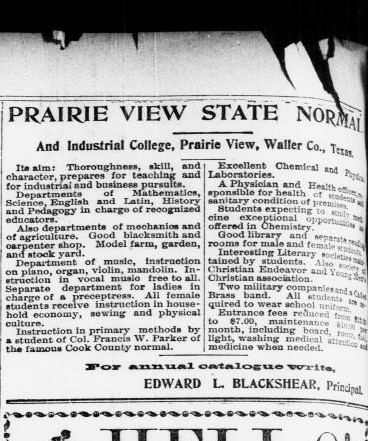 Prairie View A&M University was established as a state-sponsored institution of high education for colored youths in 1876 under the Texas Constitution, and was the first state supported college for the recently freed men and women. The college was named Alta Vista Agriculture and Mechanical College of Texas for Colored Youths at its inception, and was under the management of the Board of Directors of the Agricultural and Mechanical College at Bryan (currently known as Texas A&M).  In 1879 the Texas legislature designated the school as a normal school to prepare and train teachers and the school was renamed Prairie View Normal School.

The curriculum of Prairie View Normal School included courses in the arts and sciences, agriculture, home economics, nursing, and mechanical arts. In 1919, Prairie View began a four year senior college program, and in 1937 a graduate studies division was also added offering master’s degrees in agricultural economics, agricultural education, rural education, school administration and supervision, and rural sociology. The college received and “A” rating from the Southern Association of Colleges and Schools in 1934. As a state sponsored school in 1945, the curriculum offered at the newly renamed Prairie View University mirrored those of the University of Texas and Texas A&M University due to the “separate but equal” segregation clause from the Plessy v. Ferguson Supreme Court decision of 1896. Prairie View became a nationally recognized university in education and research in 1984, and continues to operate as an accredited institution under the name of Prairie View A&M University. A few notable alumni of this college include Frederick Douglas Patterson, founder of the United Negro College Fund, Inez Beverly Prosser, the first African American to receive a doctoral degree in the field of psychology, and Cecil Cooper, a five-time Major League Baseball All-Star.