Preachers in the rural South were central figures in their community, especially in African American communities. They often held other occupations besides preaching, since preaching usually did not pay well. About half of southern preachers were forced to work other jobs to support themselves.  According to Edward Ayers, fewer than a quarter of southern rural churches had a full-time minister. Furthermore, about a third of rural ministers served four or more churches. For instance, in Denton County Charles C. Trimble and William P. Huntley held other occupations and duties besides preaching.  For many southerners, especially black southerners, church was central to the community during the late nineteenth and early twentieth centuries and remained central into the mid-twentieth century as they became a major force behind the Civil Rights Movement.

HUNTLEY, WILLIAM P. (1841-1922) William P. Huntley, an African American preacher, educator, mason and farmer was born to William and Elise Huntley, in Arkansas on March 10, 1843. Little is know about Huntley’s life in Arkansas before the Civil War; however there are reports from the Dallas Express mentioning that he visited family Arkansas towards the end of his life, which suggests that he had ties to Arkansas. Huntley relocated to Pilot Point, Texas around 1867 and became extremely involved in the African American community, in Denton County for the remainder of his life. He married a woman named, Marie around the turn of the century. According to the Dallas Express, Huntley had fifteen children in his lifetime. In 1883, Huntley, along with other prominent members of the African American communities in Denton County founded the Masonic Joppa Lodge #62, and attended their first regional meeting in Fort Worth, TX that year. According to The Galveston Daily News, Huntley attended the Texas Grand Lodge meeting of “Colored Masons” held in Galveston TX, in 1893. Furthermore, Huntley was appointed “grand senior seward” of the Texas Grand Masonic Lodge.

Aside from Huntley’s activities associated with the Masonic Lodge in Denton, he was also involved with church activities in Denton, County and North Texas. According to newspaper articles from the Dallas Express was a pastor at the Morning Chapel CME Church in Pilot. In 1883, he attended a CME conference held in McKinney, Texas, and was listed as a “traveling elders” and was on the publishing committee for Van Alstyne, Texas. Huntley traveled to other areas of Texas for church activities, including Stephenville. In 1904, Stephenville Tribune presumably reported on W.P. Huntley from Pilot Point getting injured on his travels to Stephenville, being “from the colored Methodist church.”

Although Huntley was an educator in Pilot Point, his teaching activities do not seem to reported as much as his preaching or masonic activities. However, in 1896, he attended a “state conference for colored citizens” in Dallas with Charles C. Trimble, also an African American educator and preacher from Pilot Point. In 1888, Huntley held a debate among African American pupils asking, “Which has suffered greater injury at the hands of the white people, the Negro or Indian?”

Even a few years before Huntley’s death, he continued to embark on journeys outside the North Texas region to visit his remaining family from Arkansas and at least made one trip to Oklahoma. In 1918, The Tulsa Star reported Huntley as an ex-confederate soldier attending a Confederate Reunion in the city, and there were other African Americans that attended the reunion.In 1919, As a mason and a pastor of the Morning Chapel Church, he helped install the cornerstone into the church and preached a cornerstone sermon following the installation.

On November 24, 1922, Huntley died of tuberculosis at his home in Pilot Point. Huntley was 81 year-old and was considered as, “a pioneer member of the CME Church” who served 50 years in the ministry. According to the Dallas Express, funeral services were conducted on Sunday, November 26, with Rev. W.L. Smith leading the services at Morning Chapel CME. Ms. Lucille Bruce, a former resident of Pilot Point during the early twentieth century mentions that it was common for African American church members to have their funerals held on Sunday at the church they attended. Pilot Point residents and masons from Denton were among the funeral attendees. 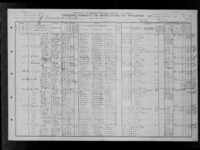 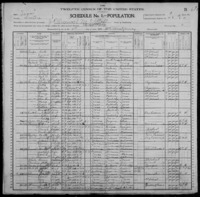 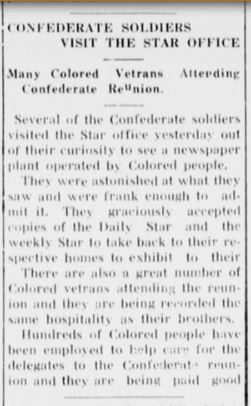 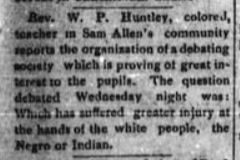 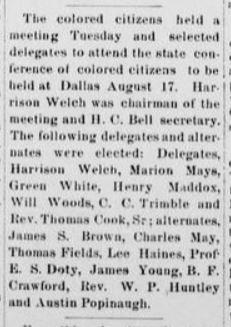 Huntley and Trimble to attend a conference, 1896
TRIMBLE, CHARLES CROMWELL (1873-1949) Charles C. Trimble, an African American educator and preacher was born in Alabama on January 18, 1873 to Celia and Buck Trimble. On January 8, 1896, C.C. Trimble purchased one acre of land along Church street in the town of Pilot Point from Joe and Emily Skinner for $131.
He was married in 1898 to fellow Alabamian, Zenobia Estelle. Their first child, Cecil C., was born in April of 1898 in Denton County, Texas. Jenobia became pregnant when Cecil was ten months old and gave birth to Bernice C. Trimble in December of 1899. In addition to Cecil and Bernice, the Trimbles had an adopted son, Rennie White, born to Texan parents in June of 1887.
Charles and Jenobia Trimble had a twenty-three year old female servant who also lived in their home around the turn of the twentieth century. The Tremble family owned a home in Pilot Point, Texas. While they lived among many white residents of Pilot Point, they were neighbors of the Holstein family.
Although Trimble’s teaching activities in Pilot Point seemed to have received more news coverage than his activities with Pilot Point churches. Presumably, Trimble was associated with religious education at County Line Baptist Church and may have occasionally preached to the congregation. Trimble is shown to have attended a “Colored Baptist Convention” in 1887 in Sherman, Texas. In addition, in 1906, Trimble also attended a North Texas teaching conference for African Americans.
Charles Trimble was a school teacher who had been unemployed for eight months in 1899. With the exception of Cecil and Bernice, every member of the Trimble family was able to read and write and had attended school during their lifetimes.
In 1909, the Trimble family moved to Wichita Falls, Texas, near the border with Oklahoma, where they purchased land at the corner of Park Street and Barwise. They had three boarders in Wichita Falls: John Love (24), Dick Foreman (45), and Sylvester White (18). Charles Trimble worked in a public school in 1910 with no recent period of unemployment and his children both attended school as well.
While in Wichita Falls, Charles served as the Principal of Booker T. Washington School while his wife, Zenobia, was a supervisor at the “Colored Day Nursery” for the children of working mothers. Following his tenure as principal in the 1930’s, Charles transitioned his career from public education to District Manager in the insurance industry. His family lived at 100 Park Street Wichita Falls, Texas until his death.
Beginning in January of 1949, Charles Trimble was under the medical care of Dr. C.B. Fuller and received his last medical evaluation on March 28 of the same year. On March 30, 1949 at 10:00am, Charles Cromwell Trimble died of heart disease. His death was reported by his grandson, Cecil Trimble Jr. and his burial set for two days later on April 1st. Charles Cromwell Trimble was buried in Lakeview Cemetery in Wichita Falls, Texas.
His wife, Zenobia Trimble, lived less than a year following the death of her husband. After thirty-eight years working in the aid of the underprivileged, school children, and young women, Zenobia Trimble passed away on February 13, 1950 and was buried alongside her husband in Lakeview Cemetery. In 1973, a historical marker was erected at the site of her burial honoring the commitment of Charles and Zenobia Trimble to the aid of the poor and underprivileged.
Today, on the land that once contained the Trimble home on the corner of Park Street and Barwise in Wichita Falls remains two large white Jubilee Christian Church buses and three large sewer pipes parked amid grass overgrowth.