Quakertown began to form in the mid-1870s. Its namesake most likely derived from the Quakers who helped freedmen in other parts of the South. The black families from Freeman Town, the first black settlement in Denton, moved to Quakertown in 1878 after a black school opened. The Quakertown community lived within the boundaries of Withers Street, McKinney Street, Vine Street, and Oakland Avenue.

Quakertown supported itself through the Fred Douglass School, churches, Dr. E.D. Moten's office, lodges, restaurants, and small businesses. Quakertown had a connection to Pilot Point, and, most likely, St John's, through church and education networks. In addition, physicians, like Dr. Moten, in the area often traveled from town to town, making a circuit. Dr. Moten had a clear connection with the people of St. John's: he signed their death certificates. 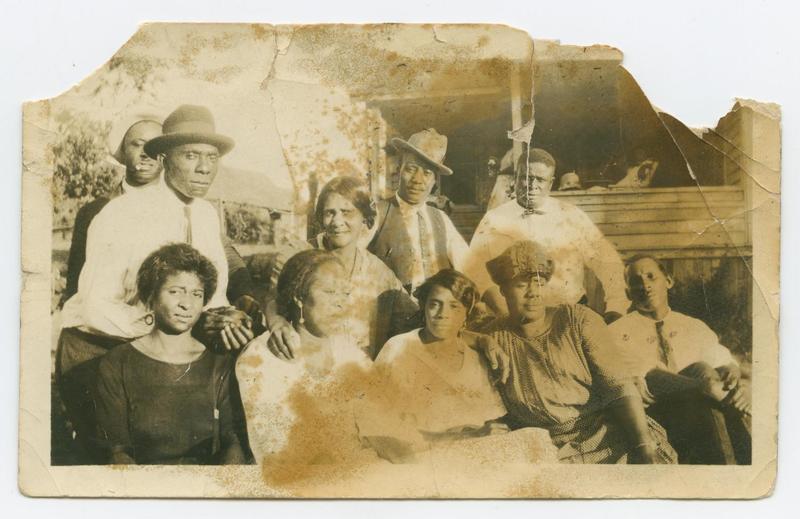 Photograph of a group of people posing together in Quakertown.

Many residents worked for businesses on the square, the College of Industrial Arts (now Texas Woman’s University), and as servants for white households. To some residents, Quakertown was more of a neighborhood rather than a town of itself. Quakertown residents would go into town often, some to bring their family lunch during their breaks, others to work.

For the children, there was a certain time to play. They would attend school when it was in session and do work around the house to help their parents. Sometimes, children would pick cotton for extra money. In terms of church life, many Quakertown residents went to church on Sunday mornings, and some churches offered Baptist Training Union classes on Sunday afternoons. At times, Pecan Creek would flood, raising up to the trees that surrounded it. This was one reason why freedmen could afford to live in the area: the land was fairly affordable considering the condition of the roads (nonexistent at the start) and occasional floods. 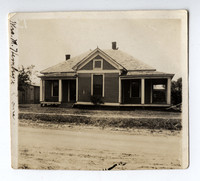 This is an example of a home from Quakertown. Notice the dirt roads.

After burning in September 1913, the community rebuilt the Fred Douglass School in southeast Denton in 1916. Then, in March 1922, the city of Denton began to purchase Quakertown properties to turn the area into a city park next to the College of Industrial Arts. One resident said that the city commission held this bond election for a city park to change Quakertown into a white area. As covered in Chelsea Stallings' thesis, "Removing the Danger in a Business Way," even though Quakertown did well financially and socially, white residents in Denton "considered Quakertown dirty."

This point-of-view was developed in part from the aforementioned floods from Pecan Creek to the dirt roads in the neighborhood. If the white population in Denton could push Quakertown residents out, they could have a "cleaner" area for their children to play. Quakertown residents had to choose between selling their land and property or moving their houses to Solomon Hill, literally on the other side of the tracks. By Feb. 1923, Quakertown had disappeared amid the new park's construction.

The Texas Historical Commission placed a historical marker at this site in 2013. The Denton County African American Museum, housed in a simple frame from Quakertown, is now located near to its original location in the neighborhood. In 2013, Denton's mayor Mark Burroughs summed up why it was necessary to commemorate this community through Quakertown Park, which is located next to the Denton Civic Center: "When you look at Quakertown Park now, it stands for peace, tranquility, friendship, family - all of the good things a healthy community has, including diversity."