The first railroad in Alabama was the Tuscumbia Railway in 1832, which aided the cotton industry and allowed for easier transport from field to factory.  In 1851, internal Alabamian railroads reached Georgia, economically connecting the two states. The Civil War brought change to the network of Alabamian railroads which were harvested for parts to provide rails and equipment in other southern states, and by 1865 the majority of Alabama's railways were destroyed.  The industrial growth of reconstruction era Alabama demanded rail service and by 1883, the Georgia Pacific Railroad reached Birmingham.

The first Texan railroad was chartered in 1836 by the First Congress of the Republic of Texas. Like the Republic of Texas, it quickly failed. Rail service as a whole struggled financially in the Lone Star State up until the 1870s when the Missouri, Kansas, and Texas Railway Company connected Denison, Texas, with Kansas City, Missouri.

This proved pivotal as railway construction exploded thereafter. By 1880, Texas contained nearly 2,500 miles of railroad and daily passengers provided Texas communities with an influx of new residents. The Texas and Pacific Railroad Company established the primary artery of the Texan rail network which bisected the heart of the state, and in the 1880s the TPRC introduced a perpendicular rail line in the east. This route provided service from New Orleans (a southern railroad hub) to Shreveport, Louisiana, linking many of the lines which originated in Alabama to the State of Texas.

In 1903, The Fort Smith and Western Railway reached the lands recently opened to settlement in northeast Oklahoma. This coal-rich territory connected to both the Kansas City and Pittsburg and Gulf lines via the FS&W and as the railway expanded south it reached the Rock Island Line. With a base just outside of Mosier Valley, a freedmen community in Fort Worth, Texas, the connection aided in the settlement of over fifty black towns in the State of Oklahoma around the turn of the twentieth century. Although this railroad went bankrupt in 1915, it is likely that these lines served several members of the St. John's community in their migration to and eventually from Pilot Point.

The Pacific Railroad reached Missouri in 1851, with the purpose of connecting St. Louis and the emerging western states.  The very same frontiersmen who established Little Dixie in the 1830's yearned for the cheap and legally unencumbered land promised out west. Yet, just as the Civil War had dissected Alabamian railroads in the south, it stalled progress on the lines in Missouri. Impressively, the construction completed the connection to western Missouri merely months following the close of combat. This was the nation's first railway connection to Kansas City. The railroads in Missouri were consolidated in 1872 and ran smoothly together for several years. In the aftermath of the war between the states, it is likely that many community members from Little Dixie used this railroad to reach Pilot Point, Texas, as their brothers and sisters had used the stagecoach routes of the 1850s: to begin their lives anew. 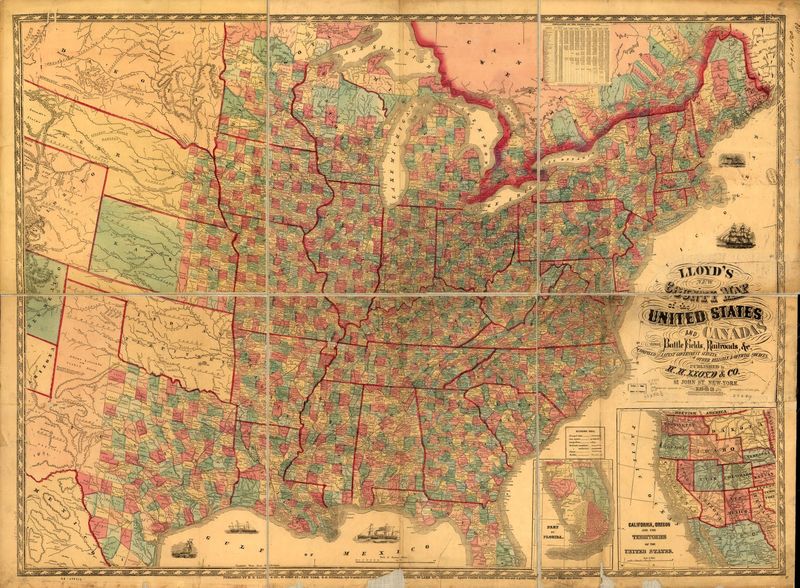 Lloyd's County Map of the United States and Canada

Map of Railroads in the United States 1894 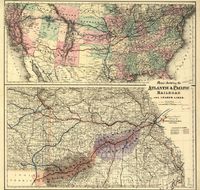 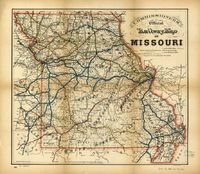