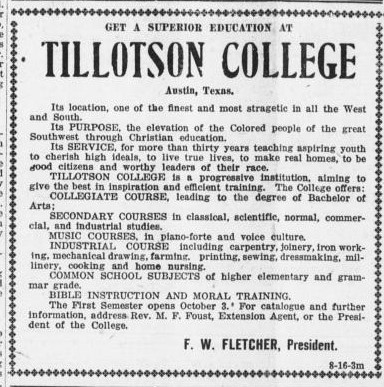 Tillotson College was founded in 1875 in Austin, Texas with the help of George Jeffrey Tillotson, a Congregational minister from Connecticut. In 1877, the American Missionary Association of Congregational Churches (currently operating as the United Church of Christ) issued a charter for the newly named Tillotson Collegiate and Normal Institute as a co-educational school, but the name change only lasted until 1897 when it was once again named Tillotson College. The college was recognized as a junior college in 1925, and then a senior college in 1931 when it discontinued teaching high school level courses. Tillotson served the African Americans in Austin as a women’s college from 1926 through 1935.