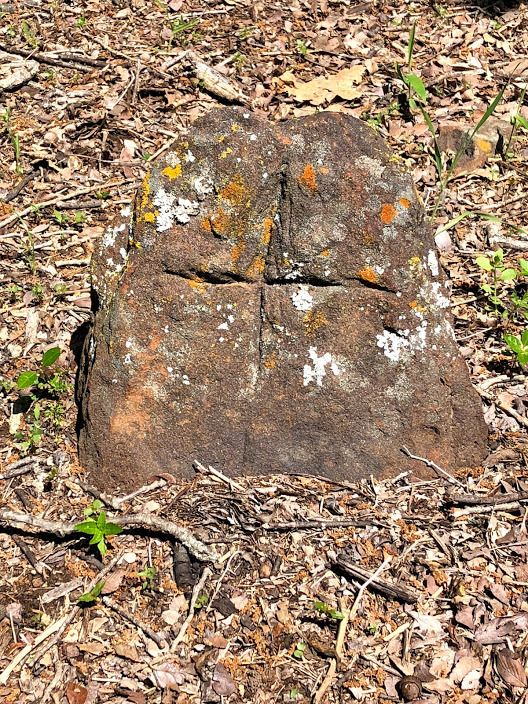 Unmarked Headstone
"I am a stranger in your land,
My home has lost its light;
Grant me a place where I may lay
My dead away from sight.”
The son of Zohar answered him,
"Hearken, my lord, to me;
Before our sons, the field and cave
I freely give to thee."
"I will not take it as a gift,"
The grand old man then said;
"I pray thee let me buy the place
Where I may lay my dead."
And with the promise in his heart,
His seed should own that land,
He gave the shekels for the field
He took from Ephron's hand.
And saw afar the glorious day
His chosen seed should tread,
The soil where he in sorrow lay
His loved and cherished dead.

The people of St. John’s community ventured to North Texas with the hope of establishing a better life for themselves and their posterity.  Strangers in a new land, they carved out a portion of North Texas to call their own.  The land they settled was rocky and infertile making farming, the majority profession in the community, an arduous task where success was measured by hard work and determination.  Those that died found rest in St. John’s cemetery.  Some had enough money to afford a tombstone for their loved ones.  Others used what materials they had to consecrate the ground in which their loved one rests.  Dotted throughout St. John’s cemetery are simple rocks protruding from the ground.  Many are markers of loved ones, but it is impossible to know which ones.  While some have initials carved into them, others have been eroded away by the elements.  It is possible that many of these rocks were those removed by our St. John’s community members while tilling their land.  In researching St. John’s cemetery and those interred there, our team has developed a healthy respect and admiration for its members.  Knowing that there are those buried in the cemetery that will never receive the recognition they deserve has been a source of heartbreak and frustration.  In an effort to recognize these members whose headstones have been lost to history and the elements, we dedicate this page.