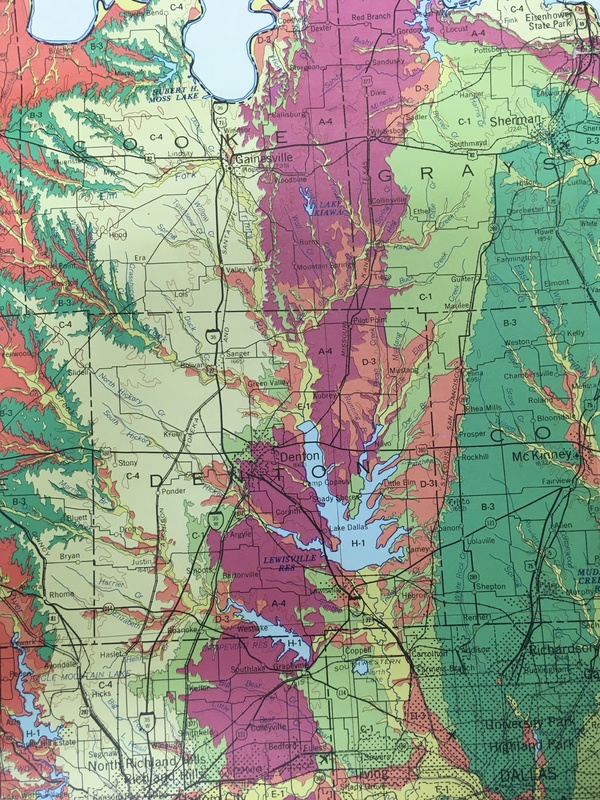 Soil Map of North Texas showing the undesirable and inexpensive soil in the Pilot Point region that may have been a draw for the community members to migrate from across many other southern states.

According to oral tradition, the founder of the County Line Baptist Church in Pilot Point was Lewis, often spelled Louis, Whitlow. Lewis Whitlow was related to Washington Whitlow, a member of our St. John’s community.  The County Line Baptist Church was founded in 1874, after ***, the owner of a Chambers County, Alabama, plantation helped Lewis Whitlow and others whom he had formerly owned as slaves find land and a new place to live in North Texas. It is likely that our St. John’s community members chose Pilot Point for this familial connection.

Another possibility for our community settling in Pilot Point is the fact that the Exoduster movement created a vacuum in the agricultural labor force. The Exoduster movement in 1879 was a collective mass migration of African Americans from the southern states to Kansas, Oklahoma, and Colorado. Also known as the Exodus of 1879, the movement was spurred by violence against southern blacks and the hope for employment and better treatment in areas not ravaged by the Civil War.  This left a void in the labor force of many southern states, Texas especially, and could be one of many reasons for our community members choosing Pilot Point to settle in.

The largely agricultural community of Chambers County, Alabama was in a transition period towards a more industrial and textile manufacturing hub during the migration of our St. John’s community to Pilot Point.  An abundance of significantly cheaper land in Pilot Point due to its rocky terrain is another possible draw for these families. Former slaves would have the freedom to purchase their own land and work their own farms and work under their own accounts doing what they were already highly skilled at, if they could afford the land.  This, as well as the explosion of violence in many southern states following Congressional Reconstruction, is another very likely reason for these families to search for a new start in Pilot Point, Texas.