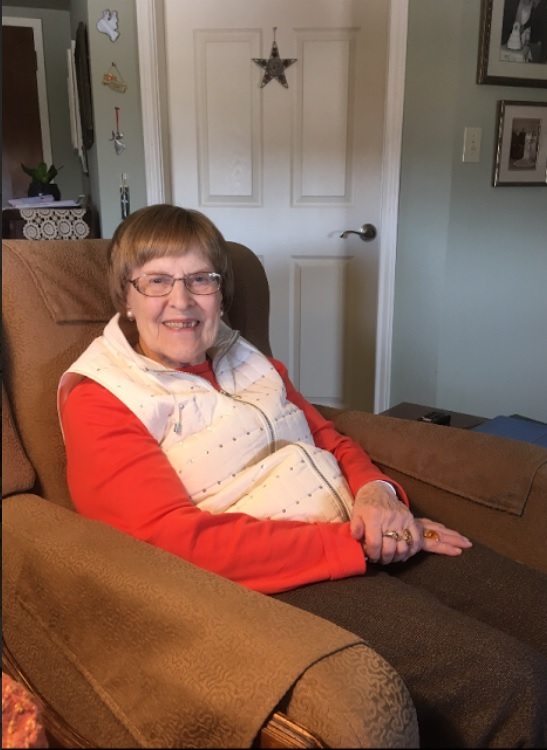 Carol Riddlesperger was born in 1918, in Hazel Run, Minnesota. Her father was a banker, and her mother was a teacher and was very active in their local church. Riddlersperger, along with her mother and sister moved to Sioux Falls, South Dakota, after her father died in 1933. After moving to Sioux Falls, she attended Augustana College, in the late 1930s, where she earned a bachelors in English. After Augustana, Riddlesperger taught high school English and was a school librarian for a couple of years, and attended the University of Minnesota to persue a masters in Library Science.[1] When World War II started, she began teaching at a radio technical school at the Army Air Corps base, in Sioux Falls, where she met her future husband Jim Riddlesperger. In 1947, she married Jim and moved to Austin, Texas soon after their marriage. Riddlesperger started teaching at Palm School, while her husband was completing a PhD in Political Science from the University of Texas at Austin. Riddlersperger, herself completed a masters in Library Science at UT Austin, while residing in Austin. In 1950, the family moved to Denton where Jim took a position at North Texas State, in the political science department, along with Roscoe Adkins (Dorothy Adkins husband). However, Jim was called back into the service a few months later, and the family moved to Puerto Rico, before moving back to Denton in 1952. Before joining the Fellowship, she was actively involved with the Retired Seniors Volunteer Program (RSVP), and did some substitute teaching in Denton. During the duration of the Fellowship, Riddlesperger was also involved with Global Connect, an organization for international students at North Texas State during the 1960s. In addition, she also ran for a position on the Denton school board in 1972.[2]

Carol Riddlesperger discusses her childhood in Minnestoa, during the early twentieth century, includes her experiences during the Great Depression, her parent's involvement in the community, and her educational background.

Carol Riddlesperger discusses moving to Texas from Sioux Falls, South Dakota in the late 1940s, including seeing a Hispanics for the time, and furthering her education at the University of Texas at Austin. 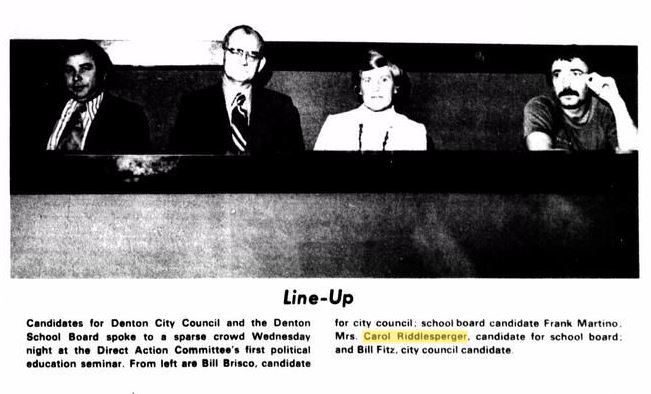 Photo of Carol Riddlesperger running for a position on the Denton School Board in 1972. (North Texas Daily)