During the days leading up to the crisis at Mansfield High many citizens opposed and supported the decision to integrate Mansfield High school. Federal Judge Joe Estes ordered the school to admit Negros and to integrate immediately. After Mansfield High School was ordered to desegregate those that oppsed the action hung an effigy in protest of the decision. The Effigy was hung in Mansfield’s Main Street on wires. Signs were attached to both feet of the dummy and red paint was splattered across the effigy. Police believed that this was not the work of mere pranksters and took the effigy down. This effigy became the first of three figures that appeared during the crisis at Mansfield. Almost immediatly after the school was ordered to desgreate schools officals began a petition for a delay of court order until the next year claiming that the school was not ready to enroll Negros at the time.

White newspapers covered Judge Estes' court order as well as the intial resistence given by the white citizens of Mansfield, before the days that the mob gathered outside Mansfield High school. Black newspaper coverage consisted of one newspaper, The Dallas Express, which discussed the state of Texas leading the way for integration in the United States. 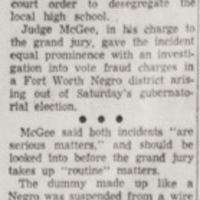 This article relates the reaction from a Federal District judge to an effigy found hanging on Main Street in Mansfield. Equating the seriousness of the effigy to voter fraud, the judge also hints that more trouble may be coming to Mansfield in the next few days. The article also notes the reactions of the Tarrant County Sheriff and L. Clifford Davis, neither of whom takes the effigy to be a “threat of violence” against the blacks of Mansfield.
Prev Next