in 1955, following the U.S. Supreme Court's two Brown v. Board of Education decisions, Mansfield High School in Mansfield, Texas, was still for whites students only. Mansfield ISD only provided schools for African Americans through the eighth grade, so African American students who wanted to continue their educations had to ride a bus to I.M. Terrell high School in Fort Worth.  Some African American residents on Mansfield, including T.M. Moody, began work in hopes of integration at the local high school. They hired Clifford Davis, a young Fort Worth attorney who had previously succeeded with similar suits for the NAACP in Arkansas. On October 7, 1955, Davis filed a lawsuit against Superintendent O.C. Rawdon and the Mansfield School Board on behalf of three African American students requesting admission to Mansfield High School.

Complaints and requests filed by Davis on September 26, 1955 on behalf of African American students of high school age in Mansfield, Texas against O.C. Rawdon and the Mansfield School Board.

On October 7, 1955, L. Clifford Davis filed a request for preliminary injunction to enjoin and restrain the defendants, including O.C. Rawdon, School Board President, and R.L. Huffman. Mansfield School District Superintendent.

Judge Estes dismisses the case on behalf of the plaintiffs.

After Judge Estes determined that "This school board has shown that it is making a good faith effort towards integration, and should have a reasonable length of time to solve its problems and end segregation in the Mansfield Independent School District." An appeal was filed on November 21, 1955 to the United States Court of Appeals.

Two separate notices regarding appearances by R.L. Huffman. The first is notification sent informing J.A. Gooch of oral deposition of Huffman and Rawdon to take place on September 17, 1956. The second document is an order for R.L. Huffman to appear on November 7, 1955.

Jackson v. Rawdon - Petition for Stay of Enforcement - by Gooch

J.A. Gooch, attorney for defendants, sends a notice requesting stay of enforcement of decree dated August 27, 1956, on the grounds that plaintiffs transferred to Fort Worth Independent School District prior to June 1, 1956. 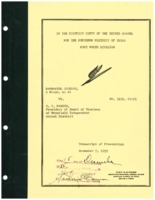 Transcript of proceedings from the Jackson v. Rawdon case, originally heard in the District Court of the United States for the Northern District of Texas - Fort Worth Division on November 7, 1955.

Judge Estes gives an explanation for his decision in the case of Jackson v. Rawdon.

Appellee's Brief filed with US Court of Appeals on May 23, 1956 by J.A. "Tiny" Gooch on behalf of O.C. Rawdon and Mansfield School Board members.

Appellant Brief filed with US Court of Appeals on May 7, 1956 by L. Clifford Davis requesting reversal in Fifth District Court in the case of Jackson v. Rawdon.

The opinion of Chief Judge Hutchison on June 28, 1956 in the case of Jackson v. Rawdon, brought before the US Court of Appeals was that the dismissal of the case by the Fifth Circuit court was incorrect, the decision was reversed and remanded with directions.

Mandate in the case of Jackson v. Rawdon witnessed and signed by Chief Justice Earl Warren of the US Supreme Court, dated August 17, 1956.

Jackson v. Rawdon - US Court of Appeals - Order on Petition

On December 3, 1956, the US Supreme Court denied the petition to stay in the case of Jackson v. Rawdon, this was the end of the legal battle in the court system.

Jackson v. Rawdon - US Court of Appeals - Petition to Stay

On September 5, 1956, J.A. Gooch, attorney for Rawdon and the Mansfield School Board, filed a Petition to Stay the enforcement of the judgement of the lower court. 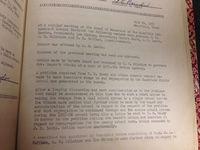 T.M. Moody requested several items from the Mansfield School board, in a regular meeting held on July 26, 1955, these requests were discussed. 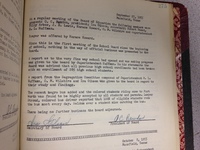 During a regular school board meeting on September 27, 1955, a reports were given by the segregation committee and the bus driver for "negro bus". 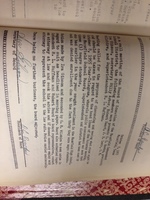 School Board minutes from a called meeting on October 8, 1955, the day after headlines in the Star-Telegram announcing that three "negro" students had applied for admission to Mansfield High School. 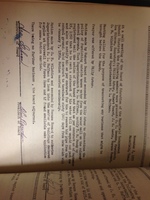 One day after court proceedings in Jackson v. Rawdon, a school board meeting is called and a contract with T.M. Moody from 1950, allowing him use of water from the "colored" school is discontinued. 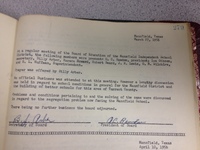 Discussion of "segregation problem" at Mansfield School Board meeting.

Document stating unanimous decision by the school board not to integrate for the 1956-1957 school year. The final paragraph in the document states that if the document is denied, rather than be jailed, the board will comply with the provisions of the court's order.
Prev Next