In the fall of 1955, L. Clifford Davis saw a problem. The Fort Worth-based NAACP lawyer listened to the complaints from black Mansfieldians about the distance black students had to travel to gain an education. The children had to catch a bus at 7:15 a.m. to I.M. Terrell High School in Fort Worth, the only black high school in the area, and ride it back home after dark. Some students who participated in after-school activities didn’t return to their houses before 9 p.m.[1] Community patriarch T.M. Moody urged the Mansfield School Board to upgrade the decrepit black elementary school and provide transportation for students who attended Terrell. However, his requests were denied.[2] 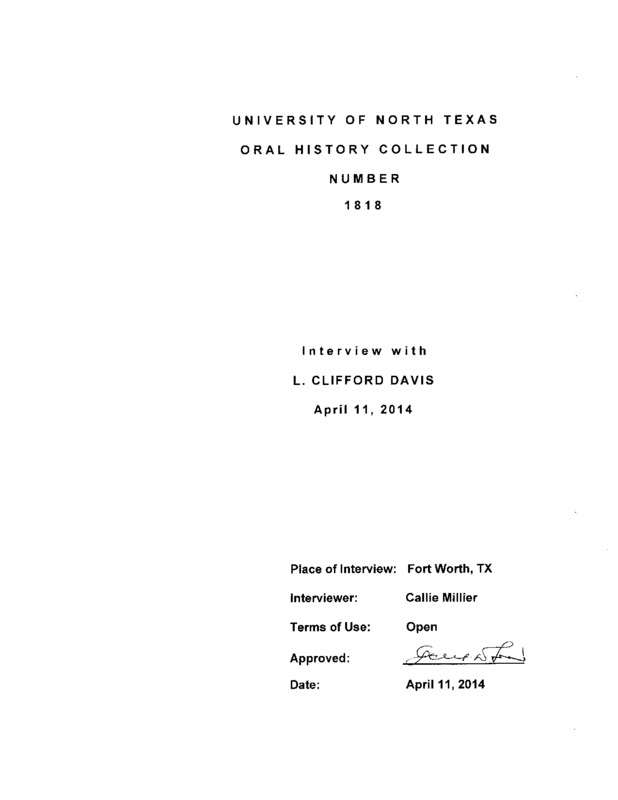 An oral history interview with Fort Worth-based NAACP lawyer L. Clifford Davis shows the struggle black Mansfield residents faced when fighting for better options for their children. Davis speaks of the lack of support at the time from the Mansfield school board to make upgrades to the school. He also chuckles when he sees the town bragging today about its diversity and acceptance.

Enlisting the help of the national NAACP Legal Defense and Educational Fund and the support of NAACP special counsel Thurgood Marshall, Davis filed a class action suit against the school board on October 7 in Federal District Court. He cited Floyd Moody, Charles Moody, and Nathaniel Jackson as plaintiffs who represented all black students in Mansfield. A hearing was set for a month later in Fort Worth in the case of Nathaniel Jackson v. O. C. Rawdon. U.S. District Judge Joe E. Estes presided over the hearing. Davis argued that the school board was violating the ruling set forth in Brown while the school board rebutted that they ran into problems of dissatisfaction within the community that prevented them from integrating sooner.[4]

Judge Estes ruled on November 21 in favor of the school board. He said “the School Board has shown that it is making a good faith effort toward integration and should have a reasonable length of time to solve its problems and end segregation in the Mansfield Second School District. At this time this suit is precipitate and without equitable justification."[5]

Not to be discouraged, Davis and Moody appealed to the Fifth Circuit Court of Appeals. The men argued that the student’s constitutional rights were being violated and the school board had not proceeded “with all deliberate speed.”

Chief Justice Hutcheson asked a school board member a series of questions about the issues the district would face when discussing integration.

Wilshire: Well, they are not satisfied with desegregation and are not ready to enter into it right at the present time, and we have reported that to the board.

Judge: What plan does your board have of conforming to the mandates of the two decisions?

Wilshire: I believe if we were given sufficient time we could work the problem out but at the present time we have no plan.

Court opinions from the federal court case Jackson v. Rawdon and the following appeals court case show the differing opinions of judges on the issue of integration. Judge Estes originally ruled in favor of the Mansfield school board, saying they needed more time to develop a plan for school integration. The Fifth Circuit Court of Appeals disagreed and said the school board was violating the constitutional rights of the black Mansfield students. The case was tossed back and forth between federal and appeals court once more before Judge Estes ruled in favor of the students and ordered the school district desegregate immediately for the 1956-57 school year.

The process began again after Davis appealed. The Court of Appeals ruled in favor of the students on June 28, saying negative public opinion is not sufficient to warrant violating someone’s rights. Once the case hit Judge Estes’ desk for a third time, he ruled in favor of the students on August 27 and ordered immediate desegregation for the upcoming 1956-57 school year, which was only four days away. J.A. Gooch, the attorney for the school board, began looking for ways to circumvent the order while Davis took the victory in stride and started the process of enrollment.[7] However, trouble was afoot in Mansfield and Davis, as well as the other African Americans in Mansfield, saw the battle was not over.