Fort Worth's NBC 5/KXAS, formerly known as WBAP-TV, is the oldest television station in the state of Texas. First signing on in September 1948, the station was determined to bring television to the residents of Texas. From its inception, NBC 5 set a precedent for news stations that would later arise in Texas. WBAP-TV was also the first news station in Texas to begin broadcasting color programs from the NBC network.[1] It is significant that a station such as this would decide to cover the events at Mansfield High in the summer of 1956 in such detail.

KXAS-TV began its coverage on Mansfield before the threat of mob violence occurred. When Mansfield became the first high school ordered to desegregate by Federal Judge Joe Estes, KXAS-TV covered the events that unfolded and in the weeks that followed made sure that these stories were accessible to the residents of Texas. Because of its close proximity, KXAS-TV was able to deliver daily news coverage of the events at Mansfield with ideal accuracy. The KXAS collection also tells the story of Lloyd G. Austin, a resident of Fort Worth who moved into an all white neighborhood only to be molested by the white residents of the area. The KXAS station covers this story in conjunction with the events at Mansfield because of the violence and to bring the issues of integration into a larger context. The KXAS collection allows us to take a look at the media in which the every day citizens of Texas were exposed to.

KXAS donated its news archive to UNT Special Collections in 2014. The KXAS collection, which consists of the raw video used in news broadcasts (only a small portion of which has been digitized), digitized paper copies of news scripts, and other materials, offers an exceptional account of the events at Mansfield High School. 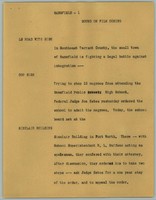 During the days prior to the crisis at Mansfield High many citizens opposed and supported the decision to integrate Mansfield High School. Federal Judge Joe Estes ordered the school to admit Negros and to integrate immediately. Jemmie Moody mother of Floyd Moody, a student of I.M. Terrell High School in Fort Worth, wanted her son to attend Mansfield High because of its close proximity to their house. Of those who opposed the decision was Mansfield superintendent R. L. Huffman. Huffman acting in accordance with the school board and a lawyer asked for a delay of one year for the court order to take effect and to appeal the court order. 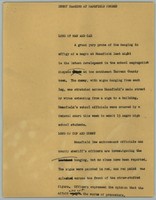 The second set of news scripts cover the immediate blacklash to Judge Estes' court order. The first of three effigies was hung on Main Street in Mansfield just days before the school would open its doors for registration. 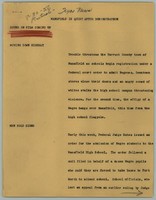 On the Morning of August 30th 1956 a mob of some 200-400 persons gathered outside Mansfield High school. Earlier that week Judge Joe Estes had issued a federal court order to desegregate Mansfield High School. Attorney for the school board J. A. Gooch, flew to Houston to meet with the fifth circuit court of appeals in hopes of obtaining a stay order that would overrule Este’s order. On this day a second effigy was hung in protest on the flagpole outside the school. No Negros showed up this day to register. 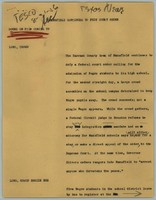 For the second day in a row a mob formed outside Mansfield High School to keep Negro students from registering. On this day Governor Allan Shivers sent Texas Rangers to the town to keep peace but not to intimidate any of the Mansfield citizens. Assistant District Attorney Grady Hight was escorted from the scene when a heated verbal exchange broke out but Hight walked away uninjured. Also on this day a news camera was broken but no other altercations occured. Three Negro students attempted to enroll via telegram but were denied because they were told that they must appear in person in order to successfully register. Attorney for the National Association for the Advancement of Colored People (NAACP) announced that no Negro students will register so long as there is the threat of mob violence. 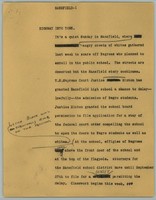 After the display of mob violence U.S. Supreme Court Justice Minton, granted Mansfield high school the opportunity to delay the court order issued by Estes. This delay would allow the Mansfield school board to lawfully refrain from opening the high schools doors to Negros. Another effigy was hung above the front doors of the high school and becomes the third figure to appear in protest. 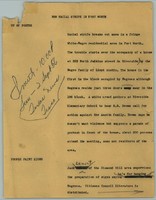 20 miles North of Mansfield another incident occurred involving integration. Lloyd G. Austin and his family moved into an all white neighborhood and this action was met with mob violence. The White Citizens Council of the area met to discuss what actions should be taken in the case of Austin. A mob forms around Austin's home and stones and soda bottles were thrown causing windows to breaks. Austin proceeds to fire a shot at a nearby car in defense. Police later show up and the crowd finally begins to leave. 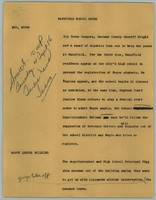 A mob formed outside Mansfield high school for a third time on September 4th, the first day of school and the last day of registration. Texas Rangers were on the scene to make sure no violence erupted. Superintendent Huffman followed Shivers order to transfer out any Negro student who tried to register. On this day two notable persons arrived to make right the situation at Mansfield. A man named “Jesus Christ” asked permission to take down the effigy hanging from the flagpole but receivesd no help and vows to come back with a ladder but he never returned. A second man named Reverend D. W. Clark showed up calling for the mod to disperse. Reverend Clark was escorted away by a Texas Ranger. The mob left quietly when it was certain that no Negro was going to register. The school board continued to fight for a delay of court order but Mansfield did not integrate.
Prev Next