Rise of the NAACP in Texas

Nestled in the border town of El Paso, the first Texas chapter of the National Association for the Advancement of Colored People arose in 1915. The following year, four more branches joined the organization. Membership grew rapidly and by 1918, Texas lead all states in the total number of members at 7,046 as well as the highest number of branches at 31.[1]

With this success came the reality of racial tensions in the state. In some cases, these tensions lead to violence against members. In 1919, a mob of white radicals in Longview burned the homes and businesses of African Americans and beat Samuel L. Jones, a black teacher and contributing writer for the Chicago Defender. Later that year, NAACP national secretary John Shillady was beaten in Austin by a gang comprised of some local officials after he went to the capitol to contest a subpoena from the state attorney general requesting documents from the state NAACP showing the validation of its operation. Along with the resurgence of the Ku Klux Klan in the state, the fear of violence caused many chapters to shut down in the early 1920s. By 1923, only five chapters remained in the state.[2]

A parade of Klansmen march through the streets of Beaumont, Texas, in 1922. Because of increased Klan activity around the state, many chapters of the NAACP closed their doors in fear of retribution or harm.

The drought in activity continued into the 1930s with only a handful of branches participating with the national organization. However, with the formation of the Texas State Conference of Branches in 1937 by Dallas native A. Maceo Smith, the organization flourished and thrived during the latter part of the Great Depression and throughout World War II. Though the consolidation and influence of the Conference of Branches, membership grew to almost 30,000 in more than 100 branches by 1949.[3] 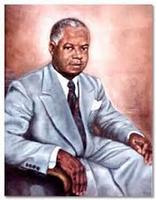 Portrait of A. Maceo Smith

As a leader in the NAACP, Dallas native A. Maceo Smith helped to form the Texas State Conference of Branches in 1937. This alliance between Texas chapters helped the organization revitalize during and after World War II.

As the civil rights movement grew following World War II, so did the scope of the NAACP. It turned its focus to desegregation of public facilities, private businesses and education while developing a strategy of affecting change through policies and litigation. Early on, the Texas branches had success in higher education with the Sweatt v. Painter case that allowed for the desegregation of the University of Texas at Austin. However, that success was limited on the primary and secondary school front.[4] After the Supreme Court decision in Brown v. Board of Education that declared, “separate but equal is inherently unequal,” the NAACP began testing the integration waters in schools around the country. One such case began in the small Texas town of Mansfield.

Heman Sweatt became the first African American student to attend the University of Texas at Austin in 1950. His case, Sweatt v. Painter, brought early legal success to the NAACP in Texas after the Supreme Court declared the "separate but equal" doctrine that UT tried to enforce did not give black law students the same educational opportunities as whites. However, this success was short-lived. Years later, the NAACP would battle the courts again over the desegregation of primary and secondary schools.