The desegregation of Texas schools after the Brown v. Board of Education decisions tells an interesting story. By August 18, 1955 approximately 28 Texas schools had announced plans for complete or partial integration.[1] Of the first districts to desegregate were San Antonio, Austin, and Corpus Christi. Other smaller population cities focused in the Western, Southern, and panhandle areas were first to desegregate. Most schools that were first to integrate had a low population of African Americans and integrated without difficulty but it is clear that the decision to integrate was largely left up to the local communities. The highest population of African Americans was concentrated in the Northeast portion of the state and those were the schools that became the last to desegregate because of massive resistance efforts. 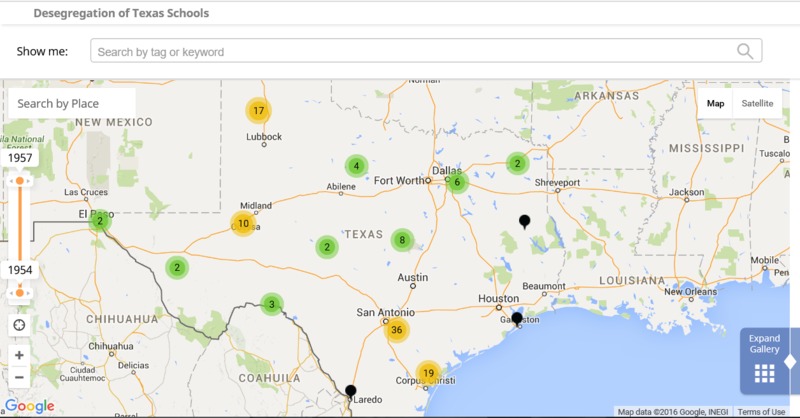 This map was intended to pinpoint the dates in which schools desegregated and to provide a visual representation of the geographical location of those schools. However, in some cases the population of African Americans had no effect on the integration of public schools. For instance, Austin with a thirteen percent African American population and San Antonio with a seven percent African American population integrated in 1955 with no trouble. This visual map allows us to examine the subject of the integration of Texas schools in a new context providing a richer understanding of the factors at play.