Dwight D. Eisenhower was born on October 14, 1890, in Denison, Texas. He spent most of his childhood in Abilene, Kansas where he graduated high school in 1909. He started attending West Point Military Academy in 1911 due to his interests in military history, and in 1915 as a Second Lieutenant. The next year, he married Mamie Geneva Doud[1]. The couple moved many times as Eisenhower’s military career began to launch.

Eisenhower received his first military assignment in 1917. After U.S. entry in World War I, he began an assignment at Fort Sam Houston, Texas. After the war, he served in Panama, and later graduated from the General Staff School at Fort Leavenworth, Kansas, in 1926. Before the outbreak of World War II, he accompanied Gen. Douglas MacArthur to the Philippines as an assistant military advisor. After the Japanese attack on Pearl Harbor, in 1941, Eisenhower re-stationed to Europe until the end of the war, in 1945, where he received an appointment as the Supreme Allied Commander in Europe[2]. Due to Eisenhower’s role in the successful invasions of North Africa and Europe, he received many honors and awards from the Allies.

After his service in Europe, Eisenhower became the president of Columbia University, in 1948, and later the Supreme Commander of the North Atlantic Treaty Agreement (NATO) forces. Shortly after, Eisenhower was approached by the Republican Party, as a potential presidential candidate for the next election[3]. Since he had been a war hero during WWII, many saw Eisenhower as a leader that could ease the Cold War tensions between the United States and the Soviet Union.

While campaigning for the 1952 election, Eisenhower stated that he would sign over the Tideland titles to Texas, which President Harry Truman had denied in 1948[4]. With this announcement, Allan Shivers, the Governor of Texas, began campaigning for Eisenhower since his opponent, Adali Stevenson, opposed the title grant. Because of Eisenhower, a Republican, carrying Texas in the election, the Democratic Party in Texas became tensely divided afterwards. Despite the political tension, Eisenhower and Shivers became closely acquainted, due to their aligning political philosophies on states’ rights. The two exchanged many letters, planning golf trips, spending a weekend at Shivers estate, sending gifts, and anything that was not related to politics.

Eisenhower appointed Earl Warren, former governor of California, as the new chief justice of the Supreme Court, in 1954, due to their similar “philosophies on government” pertaining to states’ rights, but this turned out to be a misinterpretation by Eisenhower[5].” On May 17 of the same year, in the Brown vs. Board of Education case, the court ruled unanimously that “separate, but equal” was unconstitutional, therefore rejecting the “separate, but equal” doctrine that was ruled after Plessy vs. Ferguson (1897) case[6].  However, Eisenhower disagreed with the Brown decision, and would later characterize the appointment of Warren as “the biggest damfool mistake I ever made”[7] Also, a year prior his acquaintance, Shivers had similar feelings towards Brown and made it clear to Eisenhower, “I see in this unusual Supreme Court invitation an attempt to embarrass you and your Attorney General. There is nothing more local than the public school system”.[8] 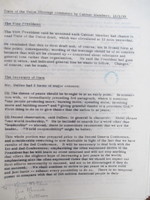 Eisenhower's cabinet memebrs of the White House give thier imput on civil rights issues, before Eisenhower makes his State of the Union address, in 1956.

Eisenhower continued to demonstrate an unbiased approach on civil rights, in the “Mansfield Crisis”, in 1956, in Mansfield, Texas. Shivers declared the crisis “a success” since the mob of segregationists’ mob at Mansfield High School with the Texas Rangers, despite no African Americans enrolled for the new school year[9]. Eisenhower often took the “middle-ground” approach to civil rights issues, and did so especially in this case since there was a re-election around the corner. 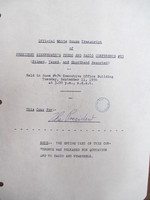 This is the offical press conference that Eisenhower made, just over a week after the Mansfield Crisis. A few reporters ask Eisenhower about civil rights issues, including the crisis at Texarkana College in Texarkanana, Texas. Eisenhower continues to show an unbiased approach to civil rights. 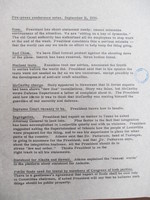 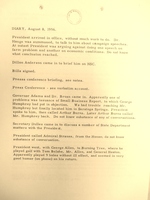 Segregation in public schools continued throughout the South well into the 1960s. However, events in 1957 forced Eisenhower to send the 101st Airborne Division to Central High School, in Little Rock, Arkansas, also known as the “Little Rock Crisis”[10]. Unlike Mansfield, the Little Rock case erupted into violence. This crisis gained more national attention, which explains why the Mansfield Crisis has not gained much recognition. This was the first time since Reconstruction that federal troops were sent in to enforce federal laws in the South. This became a precursor to the Civil Rights Act of 1957, but the movement for Civil Rights would continue well after that. 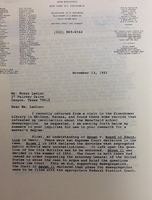 Herbert Brownell writes Robyn Ladino back, reguarding the Mansfield Crisis and his relationship between Eisenhower and Shivers.