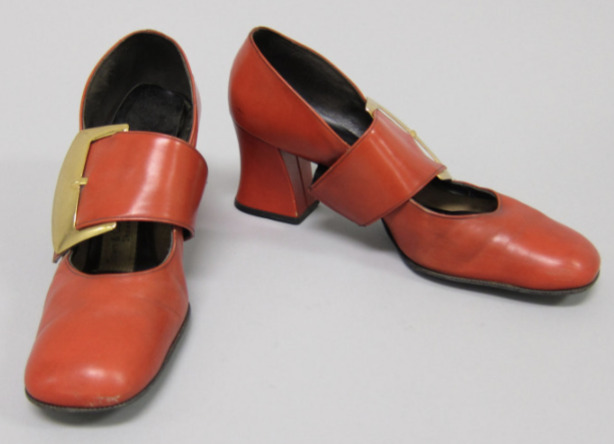 These 1970 Mary Jane style pump have qualities that echo from decades past yet still spark a twist with youthquake culture. Buckle, Mary jane style pumps do not necessary scream youthquake. However, these specific pumps have modifications that do resonate with themes that carry across youthquake culture such as nods towards androgyny with the buckle, pronounced bold colors, and twisted or skewed perspective and distortion in the form of the shoe. The Texas fashion collection describes the shoe as “pumps of red-orange leather. The shoes have a squared toe, a very wide "Mary-Jane" style strap over the instep which fastens with an over-sized rectangular gold buckle on outside of foot, and a modified "bell bottom" or Louis style 2 3/4" heel.” The designer of the shoe was "Town & Country* / Shoes / *TM REG", the creator was unknown and the donor was Ellen Flottman. 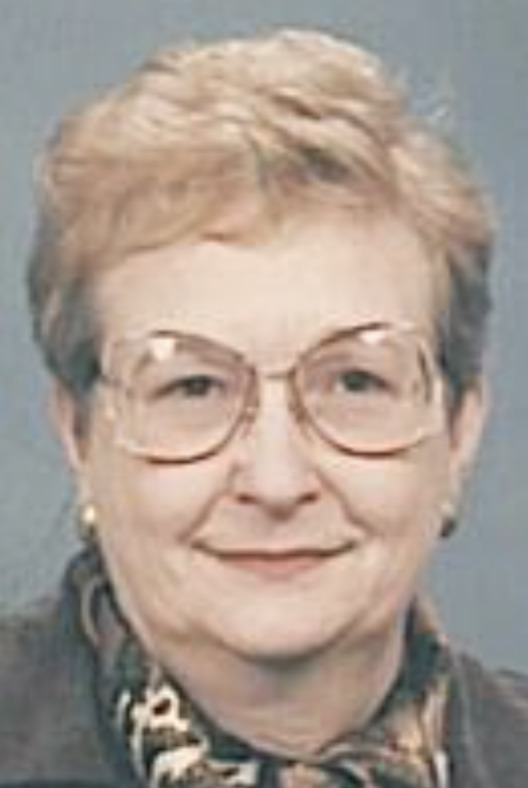 “After earning a bachelor’s degree from Kansas State University, she worked as an accessories buyer for both Macy’s and Hartzfeld’s in Kansas City. She returned to Kansas State for a master’s degree in apparel and textiles and then joined the faculty at Oklahoma State University in Stillwater, Okla. She completed her formal education with a Ph.D. at Purdue University before spending several years teaching at San Diego State University.

She spent most of her career at North Texas State University in Denton, Texas, as a professor in the School of Merchandising and Hospitality Management, and at the time of her retirement, she was associate dean of the school. After retiring, she moved to Columbia, where she became active and took leadership roles in Altrusa, American Association of University Women and Broadway Christian Church. She also was a volunteer at the Food Bank of Central and Northeast Missouri and West Boulevard Elementary School, assisting there in the Stand by Me Program. She also was a member of the Red Hat Society.

She is co-author of a college textbook and accompanying workbook, “Merchandising Mathematics for Retailing.” It is in its fifth revision and has been translated into several foreign languages.”

Knowing that the donor was both a professor at UNT and had a working background in working as an accessories buyer for both Macy’s and Hartzfeld’s in Kansas City as well as her clear interest in apparel and textiles. Flottman was familiar and knew the trade of merchandising the marketing techniques that go into fashion and the resonated with the rich history of fashion. It makes sense that she would want her artifacts to be of educational use, and with the Texas Fashion Collection so closely related to her career at UNT donating items that stood out to mark a time in history. In 1970, when the shoe was created, Flottman was 36 years old. 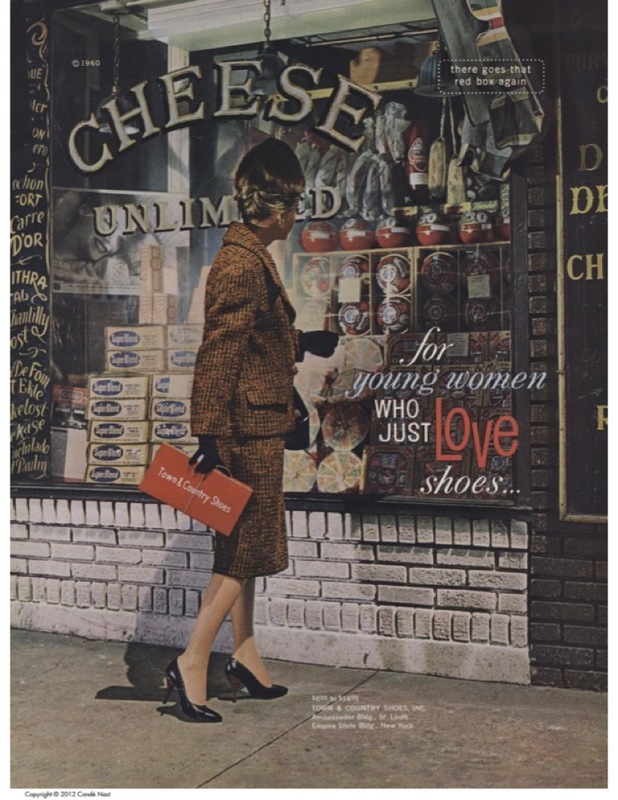 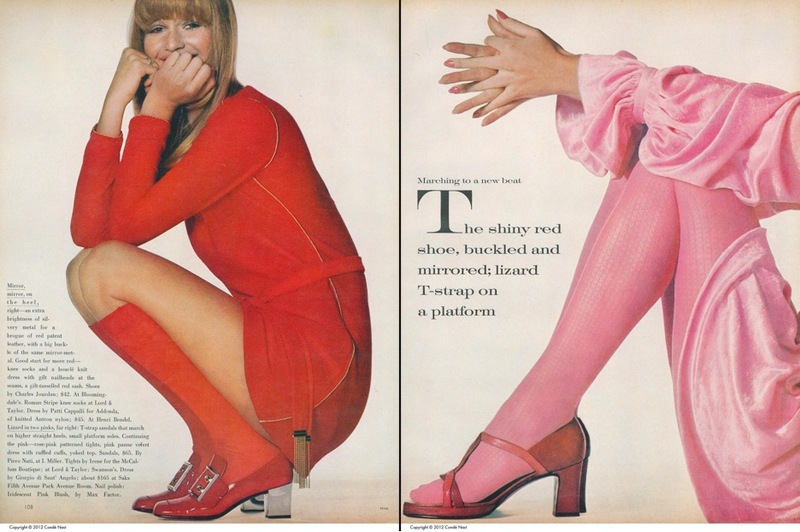 Running with the theme of modifying traditional styles of a Mary-jane strap and buckle, the mirror heel and buckle are a simple modification on the same traditional style of the Town and Country Pumps. The model is young and is dressed in all red showcasing a very youthful yet statement outfit. 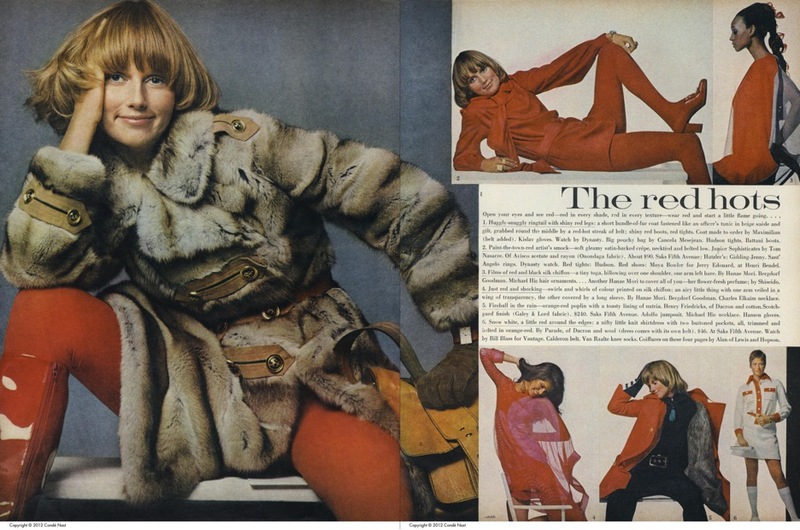 This article in Vogue published in 1969 showcases the exact same red-orange color materialized in the Town and Country Shoes pumps. Thinking about this very unique red, a red that is not a true red or a red that is drained in hue, but a red that is somewhere between red-orange that pairs well with brown, gold, warm fall colors. In the top right picture of the women dressed in the full red-orange color seems to be wearing a pump very similar to the Town and Country Shoes pumps and may even have a buckle as well. This color is specific in that it is neither feminine nor masculine but has a very edgy and strong quality to it that draws the eye. 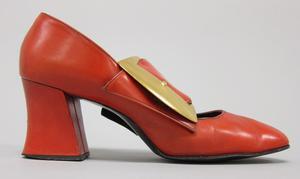 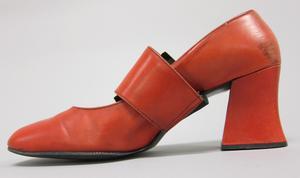 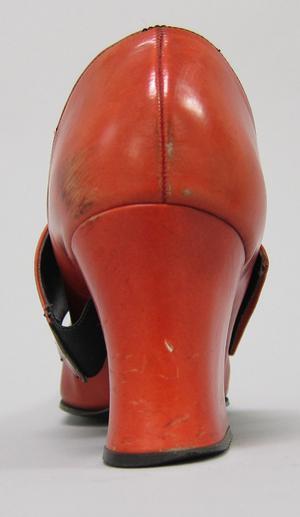