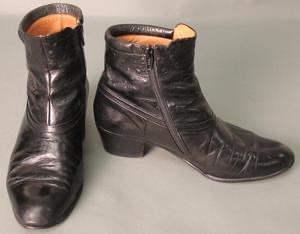 Pierre Cardin designed this pair of low men's black leather boots; he was a businessman and a French fashion designer. He created this pair of Men's short boots that were made in Spain. The primary material for this boot is black leather. The boots' design is slightly pointed toe, with a modified Cuban style with a one-inch heel. There is a zipper on the interior side of the boot. Through the wear in the leather, you can see that these boots were well-loved and worn often. Pierre Cardin is an established fashion designer known to be the first designer to sell ready-made clothing and include his logo visibly into his designs. He is best know for his geometric patterns, circles, and space-age Avant guard that was very popular in the 1960s. In 1963 he was commissioned by the Beatles to design the collarless suits. They often wore these suits with the Chelsea boots, soon became known as the Beatle boots. This pair of Pierre Cardin boots have a similar design to the Beatles boots. There are similarities between the pointed toe, the black leather, Cuban heel, and the boot's length is shorter than style boots in the 1960s. It cuts off right at the ankles. This boot became apart of a movement that captured the world by storm; this movement was the Beatles. 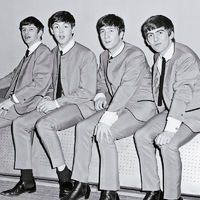 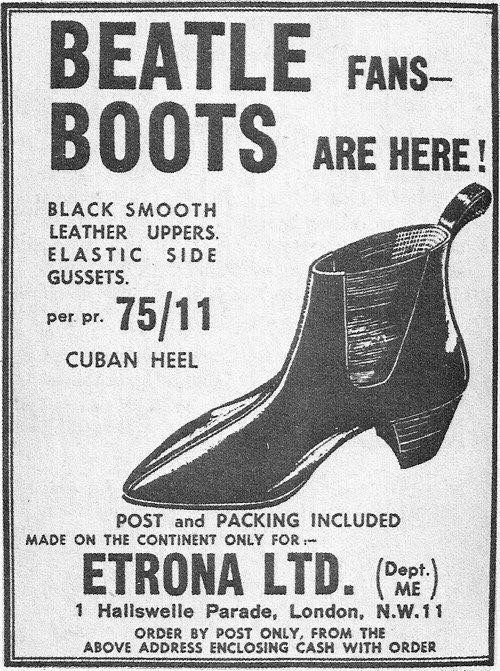 Pierre Cardin is a man who identified himself as a businessman before a fashion designer. He also studied architecture before working in fashion; this background carried over into his work by sculpting the fabric. "Cardin's ability to sculpt fabric with an architectural sensibility became his signature. Making garments with impeccable craftsmanship, Cardin possessed the skills and vision to make his dreams a wearable reality."  Cardin began his career working under Christian Dior as a tailor for menswear. This carried over into his designs later into his career as "Cardin deconstructed the traditional business suit. He subtracted collars, cuffs, and lapels, creating one of the most compelling images of the early 1960s."  This article of clothing became known as the collarless suit that was worn by the Beatles. The Beatles often wore these boots with the Chelsea boot, then became known as the Beatle boot. The Beatles took caught the eye of the world, and in turn, everything they wore was closely monitored. 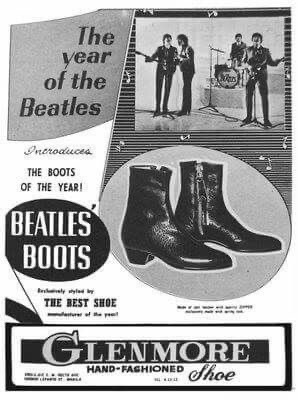 The Beatle's influence on fashion carried further than only the collarless suit and the Beatle boots. If you at the progression of the Beatles in the 1960's you can see it begin as "something somewhat normative becoming transgressive, becoming psychedelically lite from the drugs, becoming spiritual and withdrawn. That's the story of the '60s as it heads into the 70's". The design aesthetics of the Beatle boot influenced the design of many boots. By looking at the photograph taken in Liverpool London of a window storefront, you can see the Beatle boot's influence through the pointed toe, Cuban heel, short style, and solid black leather in several different variations.

The Beatle boots and Pierre Cardin boots both draw inspiration from the Congress Boots in Victorian Times. The difference between the Pierre Cardin boot and the Congress Boot from Victorian Times is the Cuban styled heal and black leather, which is also styled in the Beatle boot. This specific pair of Pierre Cardin men's low boots belonged to Joe Barentine. He bought them at a men's shoe store in Austin, Texas, on Congress Avenue. In the 1960s, he bought them for $80; in 2020, that would be equivalent to $700. He often styled the boots with different outfits, anything from jeans to a suit. They were meant to be worn as dress shoes. Joe is an avid collector of fashion; he has donated parts of his collection to the Texas Fashion Collection housed at The University of North Texas. He granted them so that other people could research, study, view, and enjoy them.