IN 1965, Diana Vreeland coined the term “Youthquake.” (fig. 1)  Editorializing in Vogue, she described a seismic shift in the world of fashion, and in cultural production in general. The impact she described was global and wide ranging, transforming the design, production, marketing, sales, and consumption of clothing, footwear, and accessories. Once traditional, regimented, and localized in Paris and New York, the fashion industry’s centrality, authority and power faced a fundamental challenge in by the rise of youth culture. Fueled by trends in music, in political events, and cultural movements including Civil Rights, Feminism, and Gay Pride, Youthquake dominated the world of fashion and dress for the next ten years. This period demonstrated a shift in the status-quo in many ways, creating much of the change we see in the world today. 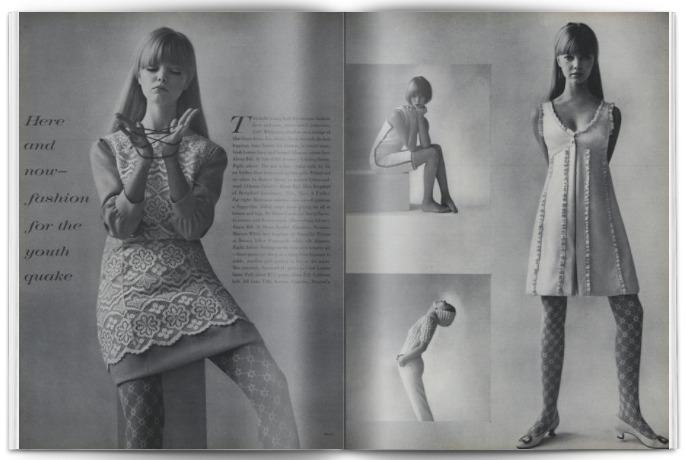 BUBBLE UP AND TRICKLE DOWN

Before the Youthquake era, fashion of the rich and famous would inspire and influence the masses. Designers made clothes for the people of higher status, and fashion would continue to ‘trickle down’ the social hierarchy. In the 60’s and 70’s, a new flow of fashion emerged. Young people were rebelling against the social norms, inventing their own style inspired by self-identity and music. Individuality and authenticity were important to the youth of the period. Designers were inspired by people on the streets, especially from fashion of the walkers on Carnaby Street in London. This was known as the ‘bubble up’ theory: every-day people influencing mainstream fashion.

YOUTHQUAKE AND FASHION IN TEXAS

Youth Culture, music, fashion and social protest has been associated with Carnaby Street and Hyde Park in London, the rural New York hamlet of Woodstock or the Haight-Asbury District of San Francisco. This exhibit offers a perspective on Youthquake fashion, and in particular, shoes, from an unexpected place: Texas.  While Dallas is famous for one of the most earthshaking events of the 1960s, the assassination of John F. Kennedy, its reputation remained, throughout the 1960s and early 1970s, that of a fundamentally conservative city in a religiously and politically conservative and racially restrictive state.

In the world of fashion Dallas, and Texas in general, is best known for the elegant, high fashion department store, Neiman-Marcus, rather than tie dyed t-shirts and youth culture. The Texas Fashion Collection, housed at the University of North Texas, is itself home to a rich array of high-fashion traditional couture donated by wealthy local collectors. In its holdings, however, are also a series of shoes and boots that reveal Texas, and Dallas in particular, as a major point of inflection for youthquake fashion.

Youth occupied public space in Lee Park and Stone Park Mall downtown, attended major concerts and festivals at the Dallas International Speedway, and began to develop the Cedar Spring area as a center of gay pride and identity. (fig. 2) 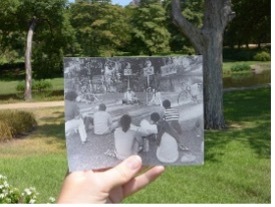 The fashion industry responded to and commercialized including the Flower Fair in Market Center in 1965. Neiman Marcus and other retailers responded by opening the Nonesuch Shop for Young Juniors downtown and in their new branches in Preston Center, Fort Worth, and Houston to merchandise new materials, like plastic, and trends that included space age design. Regional airline, Braniff Airways, adopted Youthquake fashion for its new uniforms and advertising campaigns, making its hub at Love Field a center of design and fashion innovation. In Austin, Bix Barentine opened a vintage clothing shop, catering to customers interested in putting together their own forms of personal expression and gender identity with historic garments.  Catalog retailers like the Flagg Brothers marketed shoes to African-American men seeking a distinctive and powerful look.

A STEP IN TIME

This online exhibition, “A Step in Time: Youthquake Footwear from the TFC ” ties together the stories of thirteen pairs of shoes from the Texas Fashion Collection all made in the mid-1960s to mid-1970s. These artifacts range from the most elite realms of fashion to the mass marketed, designers to resellers from the pristine to the broken in and worn beyond repair.

It involves the experience of a range of collectors including socialites, young shoppers at Neiman Marcus, a Kansas City accessories buyer, a vintage clothing collector and a pair of high school sweethearts. Combining oral history, fashion, social and political history, archival research, and close reading of material culture, to examine individual objects from the Texas Fashion Collection within a broader context, scaling up and down from the individual shoe or boot.  Addressing and engaging different issues and broader themes, depending on the evidence available.   Exploring design history, crossroads of history of marketing and consumption, personal expression, group identity, and earthshaking events.

Student work situates the shoes, and the people who designed, made, marketed, sold, bought, wore, and eventually donated these shoes to the Texas Fashion Collection, where we are interpreting them today, providing a whole new meeting to the Collection, and our understanding of fashion and design history.