In Denton county, fracking appeared to be on the periphery until it began to move slowly towards the center.

"Fracking used to be confined to very rural areas but it quickly was like a tsunami coming across Denton county." - Phyllis Wolper

"I was curious as to what all those things being added to the landscape...I'd been watching them flood Denton county." - Ken Currin

Hydraulic fracturing, or fracking for short, is a process by which water is shot at high pressure into an underground shale, releasing the natural gas and petroleum contained within. Located on the Barnett Shale geological formation, Denton occupies a unique position in the history of fracking. Though fracking in Denton was first attempted in the 1950s, new drilling technologies developed in the 1980s and 1990s making natural gas extraction more efficient and therefore more profitable.  From 2000 to 2012, extraction increased over 25-fold, from 216 million to 5.7 billion cubic feet a day. Energy companies have drilled over 200 wells inside the Denton city limits in total.

At the turn of the twenty-first century, fracking expanded rapidly across Denton county. By 2011, there were 14,000 wells within 23 counties in the Barnett Shale region of North Texas. 250 active wells were within Denton city limits, a number that would increase to 281 by the time the fracking ban was approved by voters in 2014. [1] 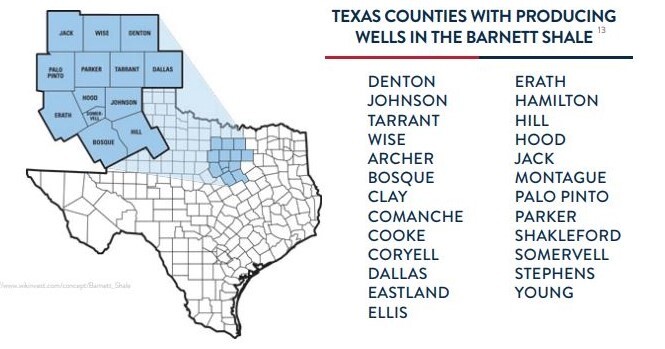 Curiosity sprung as Denton saw fracking wells bloom across the county. More and more Dentonites began to question and research fracking, and they became concerned with the consequences that fracking would have on their community's health and safety. Many expressed concerns over groundwater contamination as the chemicals used in the fracking process as well as natural gas could contaminate groundwater. In addition, the water used in the fracking process became contaminated and required special places to be stored. Also, people became concerned about air pollution. While natural gas is a cleaner source of energy than coal, its usage still releases carbon dioxide. The fracking process itself produces gases which have been reported to cause headaches, nosebleeds, and other ill effects. [2] In Denton's almost sixty-year history with fracking, the communitiy began to engage with fracking, probing it on ethical and political levels.

Guided by a precautionary worldview, activists first sought for city council to regulate fracking more effectively. Many of the activists engaging with fracking were not completely against it. They understood that it was a technology that promoted economic growth. Fracking created more than 10,000 jobs in Texas. Domestic production and consumption of natural gas provided a small boost to the US economy, about half a percentage point per year. It also meant that there was less reliance on coal. When consumed, natural gas produces only half the carbon dioxide that coal does. Some activists saw the benefit of this technology. However, they were concerned over the health and safety of their community.

"If you walk through that neighborhood you'll see with your own eyes how absurd it is. It is the most ridiculous unsafe situation. It is frack wells across the streets from homes." - Tara Linn Hunter

Activists sought common sense regulation, such as the effective implementation of setback distances. However, most realized that despite strict regulations, corporations can still systematically ignore setback distances. After much deliberation, activists agreed that it was time to move to ban fracking.

In spite of the ban being reversed by the state, an important legacy of the Denton anti-fracking campaign is that, as of November 2019, no new drilling permits have been issued in the city of Denton.

For more about Fracking and Denton, listen to the following clips:

Theron Palmer - What to Keep in Mind About Fracking

Mat Pruneda - A History of Fracking in Denton

For more interactive and in-depth visuals and maps please visit the Texas Railroad Commission's public map for drill sites in southwest Denton County alone. In addition, click here for a map of air quality sampling on the Barnett Shale, provided by the Texas Commission on Environmental Quality.