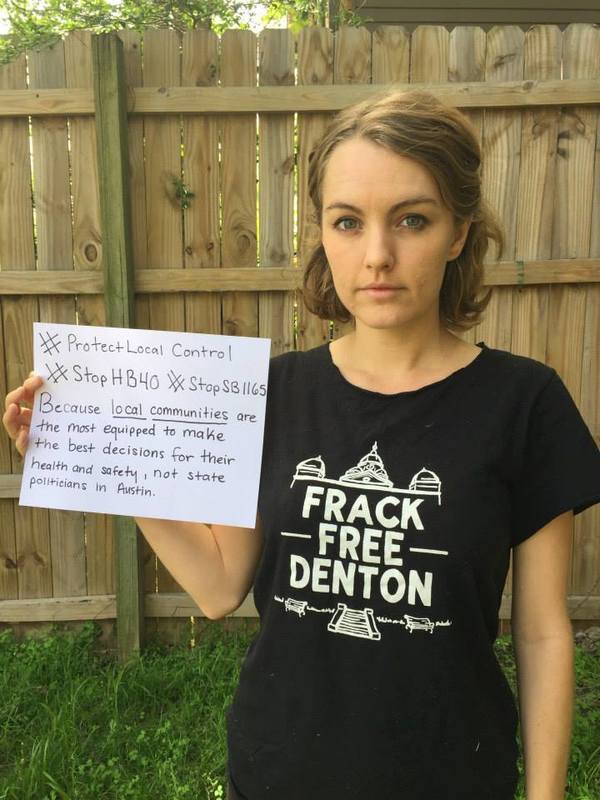 Tara Linn Hunter is a musician and environmental activist from Denton, Texas. As a member of Frack Free Denton, she was instrumental in organizing personnel and material for the movement during the ballot initiative and the run-up to the 2014 General Election. Since drilling resumed in Denton, she has engaged in acts of civil disobedience by sitting-in at frack sites and remains involved in local efforts towards sustainable energy and clean air.

Tara Linn lived around the world due to her military family, and she cites the sustainability projects she witnessed while living in places like Germany as an inspiration for her own environmental awareness. As a music student at UNT, she experienced a sudden decline in respiratory health, something she soon realized was a result of the poor air quality in Denton due to nearby fracking activity. As part of the Occupy Movement in 2011, Tara Linn worked with environmental activists protesting the Keystone XL Pipeline in East Texas, an experience which helped eventually lead her to meetings of the Denton Drilling Advisory Group in 2013-14. Soon Tara Linn found herself at the head of canvassing for Frack Free Denton (a name which she coined), gathering signatures for the ballot initative. In the lead up to the 2014 General Election, she coordinated block-walkers to cover nearly the whole city of Denton and fronted a parody musical group called “The Frackettes,” who performed satirical songs written to educate the public about the fracking industry.

After the “ban on the ban” with H.B. 40 and the resumption of drilling, Tara Linn, Adam Briggle and Niki Chochrek were arrested for trespassing during a sit-in at a well on June 1st, 2015. After this act of civil disobedience, she continued her work with Denton activists. Tara Linn believes her work as an activist is not only part of a fight for the health of the environment, but for the state of democracy in America itself, and hopes that the outcome of the Frack Free Denton campaign moves people around the country to have greater concern for their local rights and the massive influence of the oil and gas industry.

To learn more about Hunter's experiences, listen to her full interview. Shorter, thematic clips may be accessed through the site's search.