Leading up to, during, and after the Denton Fracking Ban local media followed the story and often times became a platform for both sides of the issues to express their opinions.

In 2012, Ann Smajstrla published an article in the North Texas Daily that discussed a heated debate in Denton’s City Council meeting. Cindy Spoon and three other members of Clean Resources, a Fort Worth interest group, and nine local Dentonites spoke out against Fracking to the Denton Gas Drilling Task Force. As members of the Denton Community began to organize against fracking local and national newspapers followed the story and detailed the grassroots efforts that resulted in the formation of Frack Free Denton. 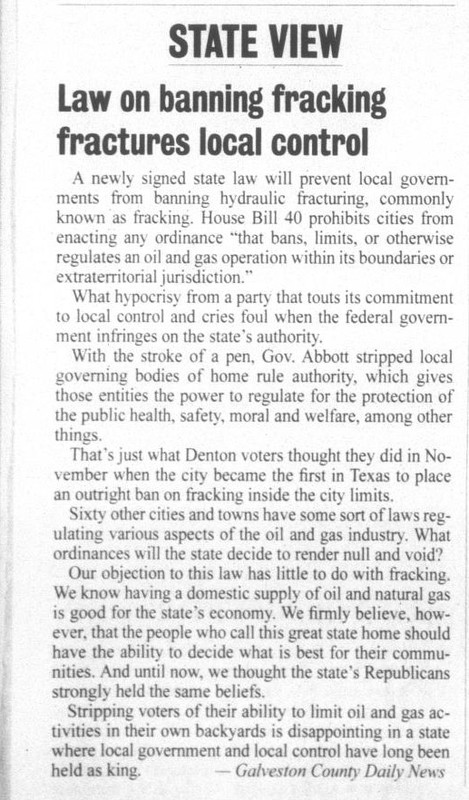 Leading up to the November 4, 2014 election media coverage of Denton’s potential fracking ban increased.  Articles from both sides of the issue emerged in publication in the hopes to sway voter opinions. One July 14, 2014 article detailed the environmental concerns associated with fracking. While an October 27, 2014 piece by Dianne Edmondson accused Frack Free Denton of a “Halloween Scare tactic” because of their claims that fracking in Denton caused the city to have the unhealthiest air in Texas. Pro and Anti-Fracking turned to media to spread their message and discredit the opposing side.

On November 5, 2014 news outlets reported that Denton’s citizens voted in favor of the Fracking Ban. Adam Briggle was quoted in a KERA news article stating that the “ industry is on notice.”  The excitement and feeling of accomplishment following Frack Free Denton’s victory was short lived. Within two days of the election, Peggy Wolfe-Heinkel reported in The Denton Records Chronicle that Texas General Land Office and Taxes Oil and Gas Association filled lawsuits in responded to Denton’s fracking ban.

As the Texas state legislature discussed House Bill 40, Peggy Wolfe-Heinkel reported that Frack Free Denton took a bus to Austin to speak to legislators and their staff about preserving home rule and local control regarding the fracking ban in Denton. On March 3, 2015 Randy Lee Loftis of the Dallas Morning Star published an article discussing the health impacts of fracking. During the early part of 2015, media coverage detailed Frack Free Denton’s effort to stop House Bill 40.

The media coverage immediately after the passing of House Bill 40 reflected the tension within Denton’s community. On June 1, 2015 Peggy Wolfe- Heinkel published an article discussing a political rally outside Denton’s city Hall. She reported that over 150 people signed to speak about how House Bill 40 would limit local control of the oil and gas industry. Council member Keely Briggs held a sign that read “ I’m NOT giving up, Don’t Roll Over” while Adam Briggle encouraged citizens to share their ideas. A few weeks later Wolfe-Heinkel reported that Adam Briggle, Niki Chochreck, and Tara Linn Hunter were released form Denton City jail after being arrest criminal trespassing after protesting at a Vantage Energy gas well. Wolfe’-Heinkel's articles after the passing of House Bill 40 detailed the community’s continued fight for local control over the oil and gas industry in their city.

Even after the passing of House Bill 40 citizens in Krum, a small city just North of Denton, organized against fracking in their town. On November 7, 2015, The Denton Record Chronicle reported that Sheila Achuff formed Frack Free Krum in order to bring change to her small rural community. The grassroots activism in Denton inspired Achuff and her neighbors to organize.

Five years later Peggy Wolfe published an article in the Denton Record Chronicle reflecting back on her community during the fracking ban. An interviewee, Randy Sorrells, admitted to feeling taken advantage of regarding disputes over the oil located on his property. Wolfe-Heinkel’s article expressed that “no copycat bans” followed Denton’s lead and state legislature passed laws quashing local ordinances.

Discussions of fracking are still present in the media. The events in Denton, Texas influenced conversations about local control not only in the United States but globally as well.