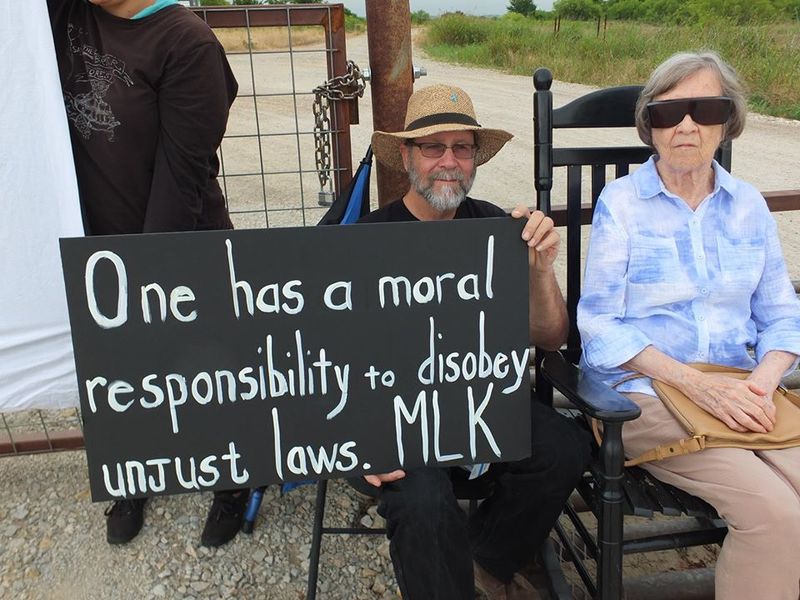 Theron Palmer is a local resident of Denton, Texas with a history of activism and local participation well before fracking was at the forefront of the collective Denton consciousness. Palmer and his wife, Elida Tamez, participated in various different projects involving the Music department of the University of North Texas (where Tamez worked), and housed international students and faculty from around the world in their home. His activism surrounding fracking started largely after the ban was repealed and the state passed HB 40.

Palmer engaged in various forms of civil disobedience as a means of promoting awareness to the local community and slowing the progression of fracking by any means necessary. These activities were largely inspired by a work shop held by leaders of the anti-fracking movement focusing on peaceful resistance and non-violent action. While police intervention was common, Palmer was not arrested until June 16th, 2015 along with his mother, Violet Palmer, during a protest in which he chained himself to the gate of the Vantage Drill site on Nail Road. Violet was not charged with any crime, but Theron was charged and released on a combined bond of $1500 for criminal trespassing and obstructing a highway. Tamez, who he credits for their participation in anti-fracking activism, was also arrested during a protest. Though she was actively battling cancer at the time, Tamez was dedicated to raising awareness for the community. Palmer said that she was never formally charged for criminal trespassing, which he claimed was because  he didn't think "they wanted to deal with a woman who needed chemotherapy the next day."

Since the ban ended, Palmer has remained active in the community, though he admits he no longer engages with the anti-fracking movement. Lately he has been focusing his efforts on providing housing for other activists who want to use as much of their time and energy as possible promoting change. Though in his own words he feels that such activities are not as active as things he's done in the past, and though he does not see himself as a forerunner of the anti-fracking movement, his belief in proactive participation at the ground level makes him an important part of Denton’s activist story.

To learn more about Palmer's experiences, listen to his full interview. Shorter, thematic clips may be accessed through the site's search.