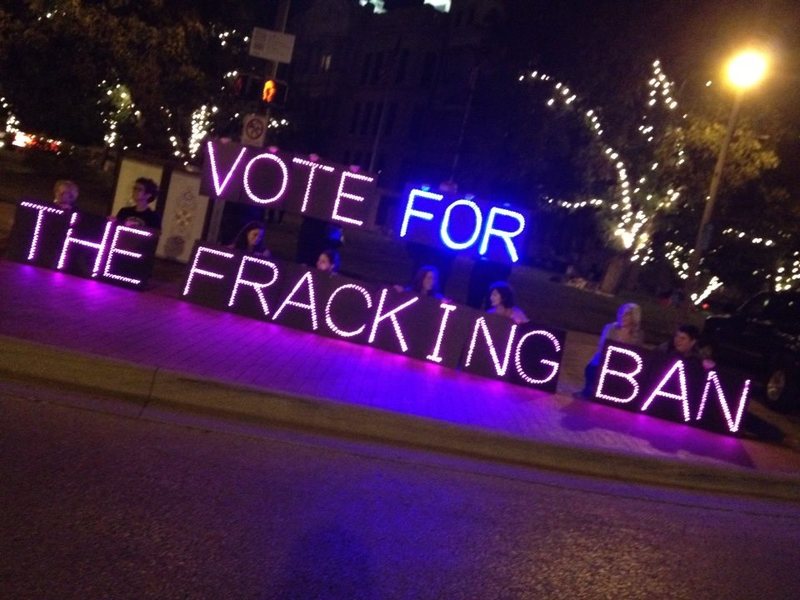 Denton became the first city in Texas to ban fracking within its city limits as a result of the 2014 campaign. Before this major accomplishment, the members of the Denton Drilling Awareness Group (DAG) intended only to educate themselves and their community about fracking. In their mission, they prioritized the health, safety, and well-being of their city and its people. However, when they began to question the setback distances of oil wells, DAG knew that they would have to push back. DAG offered recommendations to City Council, particularly revisions to Denton’s city code, which reset gas well development farther away from homes. Their advice continued to be ignored as city officials placed the economic benefits of drilling over the concerns of Denton residents. In response to conflicts over Denton’s Gas Well Ordinance regarding setback distances, DAG began campaigning as the Frack Free Denton Movement.

“We had thirty or forty or fifty people crammed into our living room sitting cross legged on the floor trying to have a community meeting in our home about what do we do. We had these two tiny kids, a house full of activists, I’m trying to put the kids to bed, my husband is trying to lead a movement. That’s just what we did!” – Amber Briggle

Amber Briggle’s description of the movement coming into fruition highlights the grassroots origins of the campaign. The movement grew out of the homes of professors, businesspeople, and activists. Local businesses like the Greenhouse and Dan’s Silverleaf offered their spaces for meetings as well. From this home base, the campaign mobilized, attending debates, mailing fliers and information, and canvassing throughout Denton. Even though their opponent was a multibillion-dollar industry, the wellbeing of the city motivated the movement’s campaign.

In addition, the campaign built community amongst those who were concerned for Denton. People from different professional backgrounds employed their expertise in ways that moved the campaign. Tara Linn Hunter used her creative talents to use music to communicate Frack Free Denton’s message. Phyllis Wolper wrote proposals regarding fracking’s effects on real estate. The community built by the movement also spoke across generations as older Dentonites worked closely with young people to campaign. These intergenerational friendships, as Cindy Spoon calls them, would never have formed if it were not for this shared purpose. 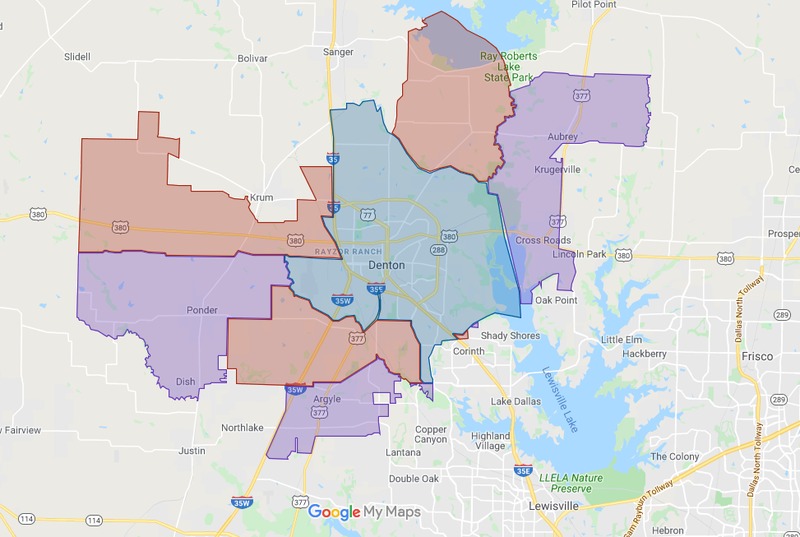 A simplified map of the ban vote results. Blue areas cover precincts which voted "for;" red voted "against;" purple were tied. Several precincts in Denton County did not participate.

“There was a lot of learning as we went…everyone was so energized and they did all this grunt work of covering every door in Denton.” – Tara Linn Hunter

The movement’s opponent was a powerful business and political influence. Gas and Oil had the money to run a more elaborate campaign. For instance, Hunter remembered trucks driving around Denton with Pro Fracking messages. Frack Free Denton would have to work twice as hard in order to succeed, and, as Hunter points out, they had the energy. Hunter organized and trained volunteers, sending them to convince voters across the city to sign a proposed fracking ban ordinance. The door-to-door campaign garnered enough petitions for the movement to present to City Council, but members voted to send it to the November general election. The movement then launched a passionate effort to win votes, such as standing outside polls and reminding people about the nuances of the bill.

However, the campaign was not without its conflicts. Tensions arose as the issue became divisive. While some strongly believed that their vote meant that they were not only for the ban but for Denton’s well-being, others believed that their vote was about property rights, American energy independence, and business. Theron Palmer pointed out the scare tactics that the opposing side would utilize, telling people that there would be no more jobs, for instance. Frack Free Denton received threats and hateful responses to their cause. On the ground, those opposed to the ban hired people to collect signatures to support the cause against the ban, using confusing and unclear language to persuade people.  However, the overall goals drove the movement forward to a successful election night. As a result of their restless activism, Denton residents officially banned fracking from their city on Election Night.

The 2014 Campaign is remembered as a moment in Denton’s history that signaled an awaking to the importance of civic voice, increased environmental awareness, and community building. What started as an educational awareness group (DAG) transformed into a grassroots movement that moved its city into action.

For more about the 2014 Campaign, listen to the following clips:

Rhonda Love - The Campaign and the Election